Blog
Home » The Myths about Government that Kill Innovation 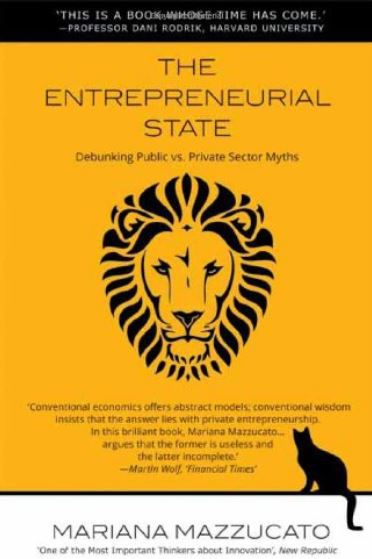 We have heard these sorts of statements for so long–especially regarding clean energy—that they have become wrong-headed and dangerous myths, says a tremendous new book by an American professor writing from England.

These myths need to be exposed and rejected in favor of a more robust role for government in solving big problems like climate change and scaling up clean energy, according to Professor Mariana Mazzucato in her newly reissued book now in paperback, The Entrepreneurial State.

Her full-throated defense of smart government action is explained in the book’s Forward by Carlota Perez of the London School of Economics.

Debunking myths is never easy. Swimming against the tide requires determination, a serious commitment to the truth and massive evidence. This is what Mariana Mazzucato displays in this book, which successfully challenges the widespread belief that the State cannot pick winners, that it is clumsy, bureaucratic and incapable of entrepreneurial risk taking.

Her key point is that the most radical innovative technologies, in different sectors—from the Internet to pharmaceuticals—trace their funding to a courageous government that repeatedly funded radical innovation and risk taking.

What Mazzucato does—unlike the critics of state action who prefer to rely only on an ideological anti-government stance—is focus on the factual history of how major innovations have actually made their way into the marketplace. What she finds is not news to students of innovation. But it runs counter to every myth-making charge by those trying to limit and destroy the affirmative role of the state in important issues like clean energy and climate.

She details how governments time and again have made investments in risky, early-stage technologies where the private markets would never have gone—from IT, to nanotech, to biotech, to transportation, to defense, and energy, and to all the components that make up the iPhone we know today, where Steve Jobs brilliantly rode on the back of government innovation research to create new products, without taking the big risks that the government actually took to make his products possible.

She demonstrates again and again how all the major “General Purpose Technologies” of our time came from the risk taking of government investment. And she argues that we need to get away from the false notion that the government has always taken a back seat to the private marketplace when it comes to funding next-generation innovations.

She makes a brilliant case that the real danger is believing in these false myths from the past to make bad, limited and ineffective policies for the future.

She brings her arguments forcefully to the clean energy space.

Interestingly, Mazzucato dismisses the proponents of green banks and venture capital that only want do small things to move the financial markets to invest in clean energy:

It is…unrealistic to think that the highly capital-intensive and high-risk areas in clean technology will be ‘led’ by venture capital or ‘nudged’ by a small and unstructured green investment bank.

Instead of making small fixes to help private banks finance low-risk projects like energy efficiency, she argues for larger, well-capitalized development banks that can take on high-risk and capital-intensive projects like offshore wind or solar.

She particularly explains why those who wait for the market to just catch up and take over are fooling themselves in the clean energy infrastructure world —and that we can’t simply wait for the market and large companies to solve the big problems of the day like climate change without a strong government role.

The green technology is still in its early stages: it is characterized by both market and technological uncertainty. It will not develop ‘naturally’ through market forces…In the face of such uncertainty, the business sector will not enter until the riskiest and most capital-intensive investments have been made, or until there are coherent and systematic policy signals in place. As in the early stages of IT, biotech and nanotech industries, there is little indication that the business sector alone would enter the new ‘green’ sector and drive it forward in absence of strong and active government policy. Thus while ‘nudging’ might incentivize a few entrepreneurs to act, most business actors will need stronger signals to justify their engagement in clean technology innovation.

And time is important, as she notes,

Leaving direction setting to the ‘market’ only ensures that the energy transition will be put off until fossil prices reach economy-wrecking highs.

In the end, she is calling for a return to truth telling about the role of government to help create massive technology transitions. Her concluding remarks deserve the last word.

This book is an open call to change the way we talk about the State, its role in the economy, and the images and ideas we use to describe that role. Only then can we begin to build the kind of society we want to live in, and want our children to live in –in a manner that pushes aside the false myths about the State and recognizes how it can, when mission driven and organized in a dynamic way, solve problems as complex as…solving climate change.

Reforming the Energy Vision: Moore’s Law and the New York Department of Public...
Scroll to top
Send this to a friend
This site uses cookies to store information on your computer. By continuing to use this website, you shall be deemed to have consented to our use of cookies and to have accepted our website Privacy Policy.OKPrivacy Policy