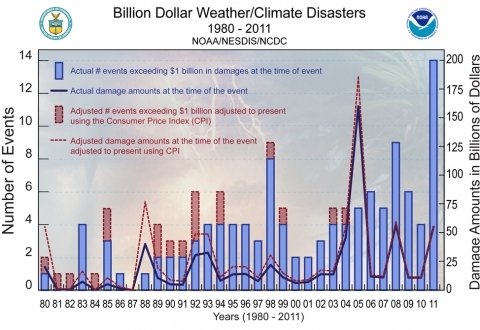 These conclusions will not be news to anyone who lost power during Superstorm Sandy… or Hurricane Irene… or the Mid-Atlantic and Midwest derecho… or any of the severe storms that seem to be recurring with increasing frequency and severity. These natural disasters have real costs, both in human suffering, and in dollars and cents; and these costs are increasing, as shown by the NOAA/NESDIS/NCDC chart above.

As they have done in the areas of clean energy and energy efficiency, states are now taking the lead in addressing the problem of energy sector vulnerability, especially electric grid vulnerability. As an example of state actions, consider Connecticut’s Microgrids Initiative, investing $15 million annually for three years to build self-sustaining electrical systems that can continue to function, enabling the provision of critical services, when the larger grid goes down; proposed combined heat and power (CHP) and energy storage efforts in New Jersey, both aimed at improving energy resiliency; microgrid and district energy efforts in Massachusetts; CHP and fuel cell incentive programs in New York; and an upcoming energy storage RFI in Vermont.  The Northeast has been particularly hard hit by recent storms, but grid vulnerability has been felt everywhere, and these initiatives in the Northeast are being mirrored in many other states, from Florida to California.

The End of the Electric Utilities? The Industry Thinks So Too
Scroll to top
Send this to a friend