Southeastern utilities have made headlines recently with plans to incorporate battery storage at solar installations across their service territories (see Florida Power & Light and Duke Energy). It turns out that the communities they serve could greatly benefit from installing solar+storage as well.

In fact, new analysis shows that solar+storage can be a cost-effective solution for community buildings across the region. In some locations, electric bill savings alone make solar+storage an affordable investment. In other places, the added benefit of improved energy resilience provided by a solar+storage system would more than offset the lifetime cost of the technologies. 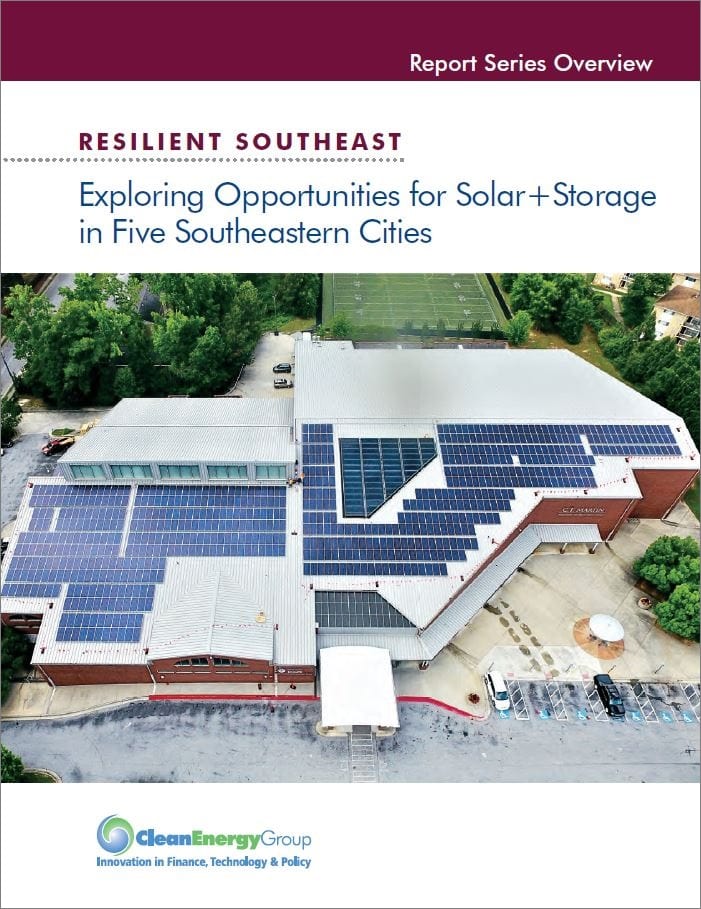 A new report series, Resilient Southeast, explores the economic case for solar and battery storage for community facilities in five cities that are no strangers to the impacts of severe weather: Atlanta, GA; Charleston, SC; Miami, FL; New Orleans, LA; and Wilmington, NC. With hurricanes Florence and Michael hitting the region in 2018 and hurricanes Irma and Maria battering coastal towns the year before, increasingly frequent extreme weather events have left millions across the Southeast in the dark when they’re most in need of power. The storms have even left hospitals, first responders, and emergency shelters powerless and unable to assist the communities they serve, with vulnerable populations like the poor and elderly suffering the most from lack of critical services.

Clean Energy Group partnered with Alliance for Affordable Energy, Catalyst Miami, Energy and Policy Institute, Southern Alliance for Clean Energy, Southern Environmental Law Center, Southface Institute, Upstate Forever, and Atlanta-based energy analysis firm The Greenlink Group to answer the question: does solar paired with battery storage make economic sense for strengthening the resilience of cities in the Southeast? The resulting analysis answered that questions with a resounding “yes,” though opportunities for the technologies vary greatly by location and, throughout the region, barriers and challenges remain to achieving widespread solar+storage adoption.

Unsurprisingly, locations with the most supportive policies were found to have the greatest potential for solar+storage deployment, as shown in the Summary of Results figure below. Solar systems in Wilmington can benefit from utility incentives. Customers in Charleston and the rest of South Carolina can lower system costs with statewide solar tax credits. Fewer supportive policies and lower energy costs make the economics of solar+storage more challenging in places like Miami and New Orleans, where even solar without battery storage doesn’t always pencil out. However, the analysis also considers the value of energy resilience – the ability of solar+storage to deliver onsite power during a grid outage. Because solar+storage can be configured to provide backup power, the systems can deliver savings beyond just lower electricity bills, particularly when powering community services such as emergency shelters, medical care, and first responders. When the savings from avoiding outage-related costs are accounted for, solar+storage proves to be a cost-effective resiliency measure in all locations and building types evaluated, even in places with weaker solar economics. This important result makes a strong case for public investment in resilient solar+storage systems providing community services. Southeast states and cities have a number of options to advance solar+storage for community benefits. A few possible actions that have shown promise in other areas include:

While some southeastern utilities have embraced solar+storage with one hand, they’ve also blocked greater solar+storage uptake by their customers with the other. For example, in 2017, Florida Power & Light took steps to turn a pro-solar bill into one that would have further restrained non-utility solar growth in the state. Utility barriers are a repeated issue across the Southeast, where regulated, vertically integrated utilities are advancing solar and storage largely on their terms, dominating the landscape with large-scale, utility-owned projects. Partly because of this, there has been some momentum building in Florida and South Carolina to move the states toward a deregulated electricity market, which would promote more competition among electricity providers and allow for more diversity in project development.

In the wake of multiple severe weather disasters, there is now little debate over the need for stronger energy resilience in the Southeast. While diesel generators have served as the go-to resource for onsite backup power for decades, communities are beginning to call for policies that can support new technologies – ones that can do more than just sit around waiting for the next emergency.

Solar+storage represents a reliable, cost-effective alternative. Along with backup power, the technologies can deliver economic benefits throughout the year and even be tapped to strengthen the overall resilience of the grid. The results of analyzing the economics of solar+storage in the Southeast are encouraging, but the largely unsupportive policy and regulatory landscape in the region must be addressed for the technologies to realize greater deployment in vulnerable communities. Now is the time to take steps ensuring that these communities are more resilient before the next storm strikes.

This blog was also posted on Renewable Energy World.

Energy Storage Is the New Efficiency