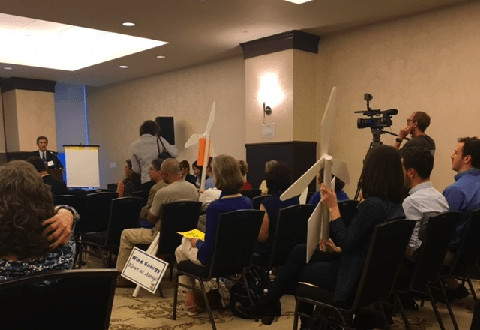 Strong winds, advanced offshore wind technology, and a large market all come together in New York where the US Bureau of Ocean Energy Management (BOEM) recently designated 81,130 acres as a commercial wind energy area (WEA). BOEM discussed the auction process for lease rights to the WEA and reviewed the timeline and milestones for bringing the WEA to auction at an auction seminar and public hearing on Wednesday. Seven developers have already qualified for the auction, which requires a bid down payment of $450,000. In addition, the New York State Energy Research and Development Authority (NYSERDA) has indicated that it will bid in the lease auction as well. If successful, NYSERDA plans to carry out site studies and environmental assessments before leasing the site to a developer.

At Wednesday night’s public hearing in New York City, a turnout of about 40 people expressed their overwhelming support for offshore wind in New York. Numerous attendees spoke not only in support of offshore wind, but also in support of local jobs, fast-action on climate change, and long-term commitments to grow the industry. A diverse group of citizen activists called on Governor Cuomo, the state Public Service Commission, and NYSERDA to adopt an offshore wind tier in the state’s new Clean Energy Standard and urged that the state’s Renewable Energy Vision contain a specific target for offshore wind. Many reiterated the view that BOEM’s five-year timeframe for a developer to submit a construction and operation plan (COP) was too lengthy, stating that we cannot afford to wait to act on climate change. BOEM Director Abby Hopper clarified that developers can submit a COP at any point in the five-year time period, and that the length of the entire BOEM timeframe was developed to maximize efficiency while reducing opportunities for litigation.

Representatives of New York City and the Mayor’s Office of Sustainability were also present at Wednesday’s meetings. The Mayor’s staff noted that the Mayor was interested in connecting the offshore wind into NY ISO Zone J (NYC); offshore wind power would help the city meet its OneNYC goal of reducing greenhouse gas emissions 80% by 2050 and from City government operations 35% by 2025. Power may also connect into Zone K (Long Island).

Exploring the Benefits of Distributed Solar in Rhode Island
Scroll to top
Send this to a friend
This site uses cookies to store information on your computer. By continuing to use this website, you shall be deemed to have consented to our use of cookies and to have accepted our website Privacy Policy.OKPrivacy Policy