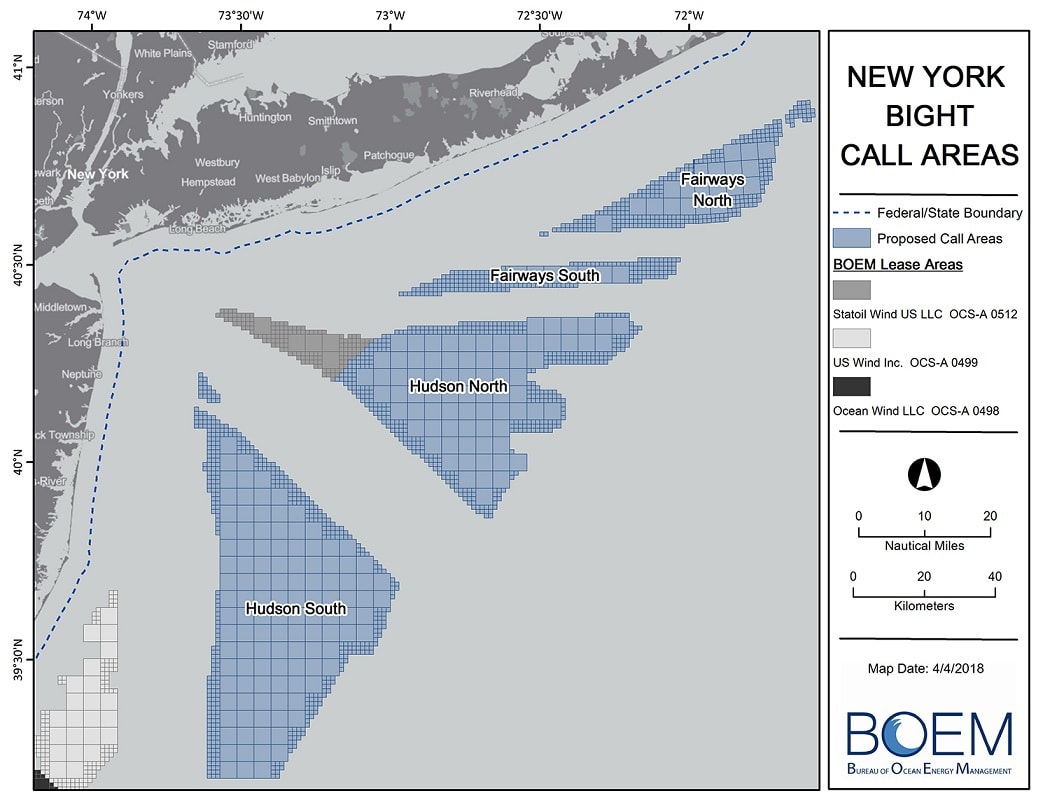 On May 9th, the U.S. Bureau of Ocean Energy Management (BOEM) held its Task Force Meeting for the New York Bight to present an overview of its Call for Information and Nominations (released on April 11th), provide updates on recent developments, and seek public input. The New York Task Force includes several federal agencies and representatives from state agencies throughout the region. Representatives from state energy offices, state environmental protection offices, the NY/NJ Port Authority, the New England Fisheries Management Council, and economic development agencies were present to discuss the future of offshore wind energy development in the New York Bight—a large curve along the Atlantic coast that extends from Long Island to the Cape May Inlet in New Jersey, and to discuss its impacts on one of the nation’s richest fishing areas and one of its major shipping channels.

The New York Bight has been proposed for significant future offshore wind development. New York Governor Cuomo announced a goal of 2400 MW by 2030, and New Jersey Governor Murphy announced a target of 3500 MW by 2030. In order for New York to meet this goal, it needs additional wind lease areas. To that end, in October 2017, the New York State Energy Research and Development Authority (NYSERDA) proposed an “Area of Consideration”—an area it identified as having the least conflict with other ocean users. BOEM subsequently identified additional lease areas in the Bight and released a Call with four proposed areas. The two largest proposed lease areas are directly off the coast of New Jersey and could support over 3000 MW of installed capacity (see the proposed areas here). The final identification and development of these proposed wind lease areas are of immense interest to the region.

New York plans to release two RFPs for 800 MW of offshore wind energy by 2019 and New Jersey plans to solicit 1100 MW. Furthermore, BOEM is on track to hold a lease auction for the New York Bight by late 2019. The potential of such rapid development raises many regional concerns, which were the subject of presentations and discussions at the Task Force Meeting. Consequently, the New Jersey BPU requested a 180-day extension for comments to BOEM on the proposed Call. BOEM has since announced a comment period extension to July 30th.

At the May 9th meeting, Task Force members presented high level-comments and information on the proposed Call development, highlighting issues and concerns that have still to be worked out for the NY Bight. These include commercial & recreational fishing impacts, military & training concerns, viewshed impacts, navigation & safety impacts, and wildlife & other environmental concerns. Broad consensus among the task force members was that the ocean is a regional and national resource that must be managed and approached collaboratively. To deliver the economic and environmental benefits of offshore wind, as well as ensure project viability, regional information sharing, regional data, ecosystem-wide analysis, and regional outreach is needed. Determining impacts on fisheries and wildlife in particular, will take data sets from across the region. Moreover, consistent outreach to oceanfront communities and commercial fisheries across the region can help mitigate the viewshed and fishing concerns.

As we are beginning to see with energy procurement (e.g. CT and RI both expressed interest in procuring wind offshore of Massachusetts), regional collaboration can bring a multitude of benefits. Stakeholders recognize the regional aspects of offshore wind development and are calling for regional collaboration to address environmental, fishing, viewshed, and navigation concerns.

Options for “Getting to Shore” Discussed at First U.S. Offshore Transmission...
Scroll to top