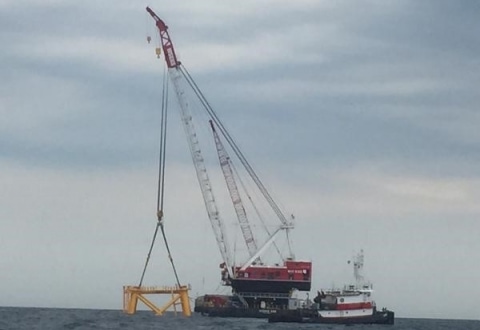 After an embarrassingly long time, it seems the US has finally stopped dithering at the starting line and entered a race that Europe and China have been running for years.

This week, Deepwater Wind put steel in the water off the coast of Rhode Island. This is the first offshore wind installation in the US, and although it is a relatively small demonstration project – 5 turbines with a combined capacity of 30 MW – it is hugely significant for the offshore wind industry in this country, which has seen prior promising projects succumb to economic barriers, permitting struggles and legal challenges.

Offshore wind presents enormous potential benefits. Not only are winds steadier and stronger offshore, but the technology can provide a renewable resource to the 53 percent of the US population living in densely populated coastal areas, where energy is expensive, demand is high, and land-based renewables are often limited. In the case of the Rhode Island project, the wind farm will help Block Island residents to reduce their reliance on the expensive and polluting diesel generators that have supplied their island grid. The small wind farm is expected to save Block Islanders up to 40 percent on energy bills, and lower carbon pollution by 40,000 tons annually.

With more than 8,000 MW of offshore wind installed worldwide, the Block Island project is a drop in the bucket, in terms of generation. But the project is significant symbolically, and it should help to dispel some myths and fears that have frustrated previous attempts to deploy this proven technology in the US. If it smooths the way for future, larger offshore wind development in the US, the Block Island demonstration project will have been worth its considerable price tag.

Should Utilities Own Energy Storage?

Energy Storage, Electricity Markets, and Economics
Scroll to top
Send this to a friend