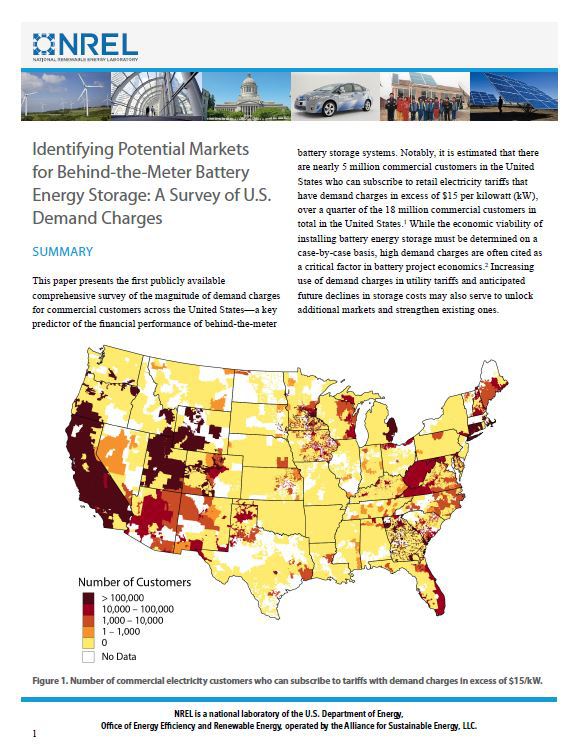 According to industry analysis, the current commercial market for customer-sited battery storage is essentially concentrated in one state, California, but new research shows that more than 25 percent of commercial utility customers across the United States may be able to cut electricity costs with batteries today. What’s more, some of the best economic opportunities can be found in surprising states like Colorado, Nebraska, Michigan, and Georgia.

These findings are based on the ability of battery systems to help customers manage demand for grid supplied electricity. Most medium and large commercial customers, as well as some small commercial and residential customers, are billed for electricity demand through utility demand charges. Like volumetric energy charges (billed in $/kilowatt-hour) that are familiar to many customers, demand charges (billed in $/kilowatt) are another way for utilities to recover the costs associated with providing enough generation and distribution capacity to meet their customers’ needs. Demand charges are typically based on a customer’s highest level of electricity demand during a billing period, known as peak demand. The more electrical appliances and equipment a customer uses at the same time, the higher the demand for electricity. (Take a look at this fact sheet if you want to learn more about demand charges.)

Even though demand charges often makeup 30 to 70 percent of commercial customer’s monthly electric bill, many customers don’t have a good understanding of how demand is measured and billed or how to manage these costs. Because demand charge rates can vary considerably across utilities, locations, building sizes, and customer types, there is little transparency regarding the amount customers are paying for electricity demand and the regions where opportunities may exist to reduce demand-related expenses.

The new analysis from NREL and CEG fills this market information gap by analyzing the energy use of U.S. commercial buildings and comparing representative customer load profiles against more than 10,000 existing utility tariffs. With this data, the demand charge landscape (shown in the figure below) can be visualized across the country to identify where rates are high enough to create an economic opportunity to use energy storage for demand charge management. Unlike solar and efficiency, which are great at reducing electricity consumption but not well-suited to reduce peak demand, battery storage is a flexible resource that can be strategically dispatched throughout a billing cycle to decrease demand and lower costs. 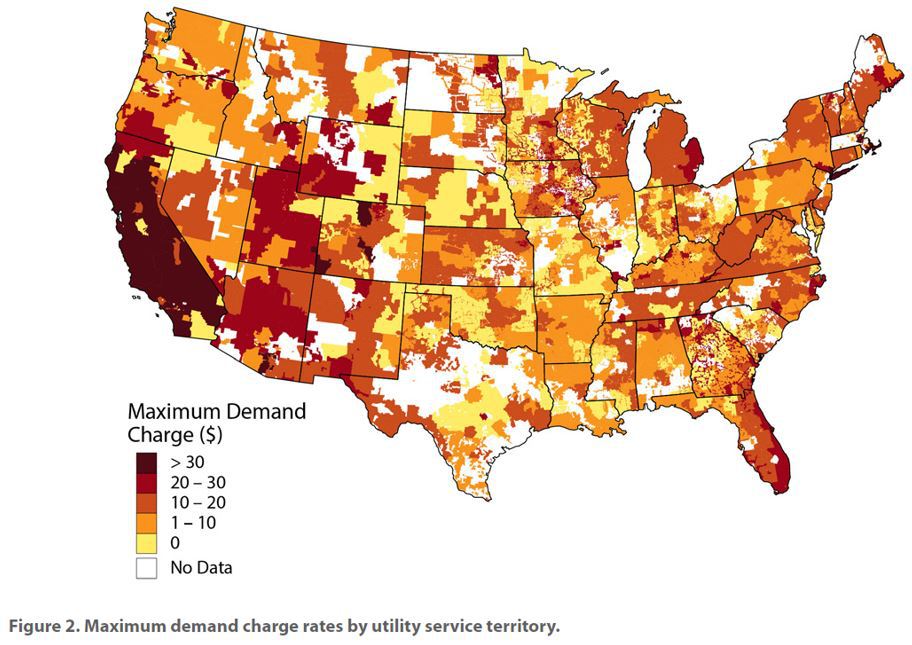 In addition to the revelation that one in four commercial customers could be eligible for utility tariffs with demand charges greater than $15/kilowatt, the analysis found a surprising diversity of locations where batteries could play a role in reducing customer energy costs. As expected, California and New York topped the list for both highest demand charges rates and biggest battery market opportunities, but states in nearly every region of the county made it into the top 10 in each category.

Colorado was found to have the third highest commercial demand charge rate in the country, followed by Massachusetts, Arizona, Nebraska, and Illinois. The list was rounded out by Georgia and North Carolina in the South and Vermont in the North. Georgia, Colorado, and Massachusetts also make top appearances in the list of largest potential market opportunities at $15/kilowatt and above, respectively taking spots three, four, and six. 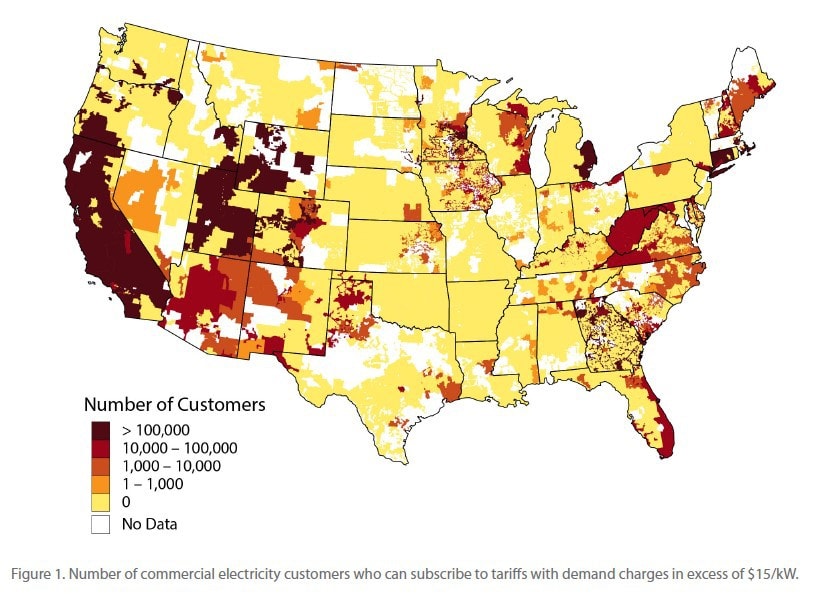 The Midwest is prominently featured in the market opportunity list, represented by Michigan, Minnesota, and Ohio. Texas and Connecticut fill out the remaining spots. When looking at customers eligible for tariffs with demand charges in excess of $20/kilowatt, Kentucky, New Mexico, Alabama, and Iowa enter the list of top 10 largest market opportunities. All-in-all, 19 different states were found to have either some of the highest demand charge rates or behind-the-meter market potentials in the country.

Based on these findings, the market opportunity for cost-effective demand management appears to be much larger and more geographically diverse than it is today. However, despite this apparent market potential, there are clearly barriers to broader adoption of behind-the-meter battery storage. This is due in-part to the invariably slow market uptake of a still-emerging energy technology, but there are also regulatory barriers to greater adoption of customer-sited battery storage and new technology risks (whether real or perceived) that can make storage project financing challenging. Even California’s thriving behind-the-meter storage market is largely driven by storage incentives through the state’s Self-Generation Incentive Program. This should be notable to other states with high demand charges that are looking to spur battery storage market development within their own borders.

The analysis represents an important first step in assessing the potential magnitude of the behind-the-meter battery market in the U.S., but it will take much more locally-focused, on-the-ground work to identify real-world project opportunities. Demand charge rates are just one aspect of the economics of battery storage for demand management. How customers use electricity (their electricity load profile) is a major factor in determining whether or not storage makes economic sense. It will take active interest from local organizations and commercial customers to pursue behind-the-meter storage solutions (ideally coupled with state incentives) to ultimately realize the true market potential of customer-sited battery storage.

NREL and Clean Energy Group will host a webinar on Tuesday, September 19 to discuss the findings of the report. Authors Joyce McLaren and Seth Mullendore will present their research and answer questions from the audience. Read more and register here.

This article was also published in The Energy Collective.

Firm Public Commitment, a Pipeline of Projects, and Investment Driving UK Offshore...
Scroll to top
Send this to a friend