With the long-anticipated approval of its new Statewide Electric Storage Program, Connecticut has just leapfrogged the rest of New England to become the new regional leader in distributed battery storage program development.

The new program adopted by the Connecticut Public Utilities Regulatory Authority is a massive 9-year initiative that combines up-front incentives with customer performance payments to achieve a goal of 580 MW of new distributed battery deployment. That capacity goal is evenly split between commercial and residential customers.

Also notable is the Connecticut program’s commitment to equitable access. The program doubles its up-front incentive for low-income participants and those in historically underserved communities. (Massachusetts, which is currently revising its ConnectedSolutions program for the next 3-year cycle, should now follow suite.) And the Connecticut program includes other equity provisions, such as low-cost loans, leases, and an on-bill payment option. The PURA order also directs program administrators to strive to place 40 percent of the residential batteries installed under the program in low-income and historically underserved communities.

This emphasis on equitable access is important because historically, new clean energy technologies tend to be adopted by the wealthy, bypassing the low-income communities that need them the most. In the case of energy storage, its resilience and energy cost-saving benefits are critical to underserved communities, which are hit hardest by natural disasters and the associated grid outages. For example, if properly installed at multifamily affordable housing facilities, Solar+storage can provide backup power to select loads while grids are down, allowing residents to shelter in place and supporting life-sustaining equipment such as air conditioning, water pumps, refrigeration and powered medical devices. During normal operating conditions, the same solar+storage systems can reduce electricity costs and earn revenues through program incentives and net metering.

In addition to the up-front battery rebate, customers will receive performance payments when they allow their utility to dispatch their battery to reduce regional peak loads. Similar to ConnectedSolutions program performance incentives in other New England states, the proposed rates are $225/kW in the summer and $50/kW in the winter.

These rates are based on extremely thorough cost-effectiveness testing. The Connecticut Green Bank, which helped to develop the program, subjected BTM battery storage to five different cost/benefit tests. Scores on the most important of these, the RIM test, show that not only will batteries pay for themselves through benefits to customers and the grid, they will also not shift costs between customers. This was an essential feature of the program for PURA, which considers the RIM test the most important. 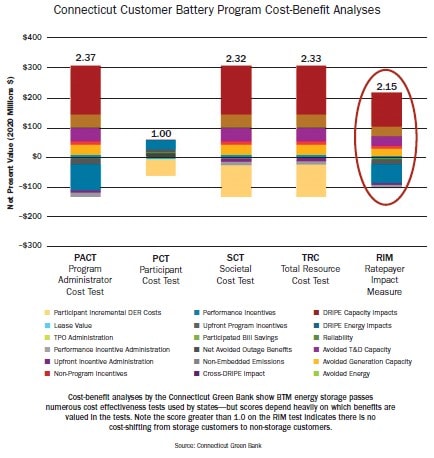 With the range of incentives and low-cost financing offered through the Statewide Electric Storage Program, customer batteries should pay for themselves well within the lifespan of the equipment.

CEG/CESA’s new report, Energy Storage Policy Best Practices from New England: Ten Lessons from Six States, highlights some of the valuable policy lessons that can be drawn from the New England experience. A webinar highlighting this report is scheduled for August 26; learn more here.

South Carolina’s Past Failures and New Policies Contribute to a Brighter Future...

Report Shows Strong Solar+Storage Market Growth… And Plenty of Room for I...
Scroll to top
Send this to a friend
This site uses cookies to store information on your computer. By continuing to use this website, you shall be deemed to have consented to our use of cookies and to have accepted our website Privacy Policy.OKPrivacy Policy