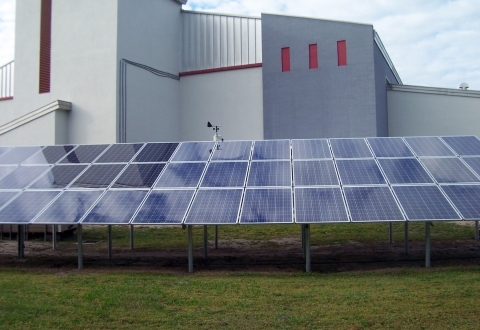 Ever notice an obvious solution to a problem that nobody else seems to have picked up on?

That’s what happened in Florida in 2012 when the Florida Solar Energy Center, working closely with the state energy office, began a program to equip public schools designated as community hurricane shelters with resilient solar+storage systems.

Given the pace of technology and market development, both solar PV and batteries were more expensive at the time. In addition, since the program was funded through the federal ARRA program, US-manufactured equipment was required, rather than cheaper imported components. Still, Florida’s E-Shelter program has managed to put solar+storage systems at more than 115 schools so far, at an installed cost of $74,000 to $90,000 per school. Costs were low because the state took a “cookie cutter” approach and kept the systems small – a typical system consisted of a 10 kW solar PV array, with a 48 kW battery, just enough to keep lights and electrical outlets operating during a grid-disrupting natural disaster. The state was also able to negotiate a volume discount by using a single installer for the entire state. School received the systems at no cost, and program staff calculated that each school would save around $1,500-$1,600 per year on electricity costs, in addition to serving an important community function during hurricanes and other disasters.

Why is this a no-brainer? Well, for one thing, every community has a school.  Schools tend to be centrally located, they can accommodate large numbers of people, they have necessary facilities like kitchens and bathrooms, they are handicapped-accessible… in other words, they make great emergency shelters, which is why public schools serve as designated shelters in many communities.

A second reason schools are great candidates for solar+storage technology is that they often have lots of space for solar panels, including both on the roof and on the school grounds. In fact the Solar Foundation recently released its National Solar Schools Census, which identified 3,752 schools across the nation that are already equipped with solar energy systems. That means there are schools in many states that are ripe for a solar+storage retrofit.

Of course, working with schools presents challenges as well as opportunities. Decisions ultimately rest with local school administrators and school boards, meaning that E-Shelter Program staff had to sell the idea to each school board. Because school administrations tend to turn over rapidly, systems generally had to be completely installed within a year.

Florida’s program will be examined in detail in Clean Energy Group’s upcoming webinar on resilient power in schools, scheduled for Tuesday, March 31, at 2 p.m. Guest speakers include Susan Schleith of the University of Central Florida’s Solar Energy Center, and John Leeds, Senior Management Analyst at the Florida Office of Energy, who will discuss the Florida program’s success, lessons learned, and future initiatives. We will also hear from Avital Szulc of the third-party solar+storage provider A.F. Mensah. Mensah is working on solar+storage systems at schools in New Jersey. Szulc will discuss the company’s model for solar+storage financing, and how these systems can capture value streams by participating in energy markets (thus providing a market-driven model for resilient power deployment, rather than relying on government grants). Additional speakers Adje Mensah, Peter Mendonez, and Drew Adams will be on hand to answer questions.

Resilient Cell Towers: An Idea Whose Time Has Come