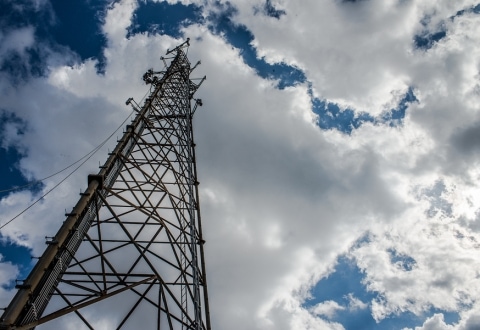 One type of facility that is often overlooked, perhaps because they are largely unseen, is cell towers. Typically sited in remote locations, these towers don’t require much electricity to function… but they do require some, and if their supply is cut off during a grid outage, having a place to charge your cell phone won’t do you much good.

Supporting cell towers with distributed generation is not a new idea. Thousands of cell towers around the world run on diesel generators, usually because they are sited where there is no easy access to the electric grid. Fuel cells have also been used to provide backup power to grid-tied cell towers, with good results. For example, more than 60 cell towers in the Hurricane Sandy disaster area, which had been fitted with fuel cells for backup power, continued to operate throughout the disaster, while others failed.

Of course, the drawback with both diesel generators and fuel cells is that they require fuel to run.  In the case of 22 NYSERDA-supported fuel cell generators at towers, fuel tanks had to be replaced every three days to keep the towers operating during the grid outage. Fuel tanks are also vulnerable to theft, especially during emergencies when fuel may be in high demand and short supply. And in the case of grid-connected towers, backup generators sit idle 99% of the time while the grid is up and running, representing sunk costs.

Solar PV and batteries offer an alternative solution that not only eliminates the need for fuel deliveries and onsite storage tanks, but can function year-round to reduce electricity costs. This is important, as electricity costs contribute up to 15% of total cellular network operating costs for grid-tied towers; this percentage can increase up to 50% for towers in remote locations, due to the cost of running and maintaining diesel generators.

As with other critical infrastructure, resilient power service providers are emerging to serve the cell tower market with retrofit solutions. One example is the Panasonic Eco Solutions Green Tower, unveiled this month at the Mobile World Congress in Barcelona. The company offers a plug-and-play product that marries a lithium ion battery to a small solar PV array. The product is offered in a variety of sizes to support tower loads from 50W to 3kW. In addition to resiliency benefits, the system offers tower operators increased energy efficiency, reduced operating costs and, in some markets, the opportunity to benefit from net metering and electricity arbitrage.

Panasonic’s solution is an energy-as-a-service model similar to the one companies like Solar Grid Storage (recently bought by SunEdison) have been touting for larger facilities. It requires little or no capital outlay on the part of the facility operator, pays for itself in lower costs and added value, and relies on market economics rather than government grants to support deployment. It’s a proven model, successfully employed by the solar industry, that is increasingly being adapted to solar+storage hybrid systems.

The combination of new solar+storage technology, emerging favorable grid services markets, and third-party service providers presents states and municipalities with a unique opportunity. Resiliency should now be a requirement in cell tower siting and permitting, and states and municipalities should seek ways to incentivize resilient power retrofits at existing towers.

Solar+Storage: What It Is, How It Works, and Why Your City Needs It

Solar+Storage in Schools: The No-Brainer Solution for Clean, Resilient Shel...
Scroll to top
Send this to a friend