Blog
Home » Offshore Wind and Japan: Will the U.S. Win or Lose This Technology Race? 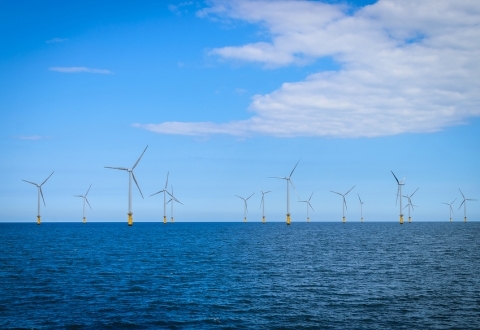 The nuclear power crisis in Japan may open up new opportunities for offshore wind innovation, based on recent developments following the Fukushima Daiichi meltdown in March 2011. Japan’s rapid response to find alternative energy solutions, including decisive government action, suggests how the U.S. could gain a foothold in a new segment of offshore wind—floating turbines.

Following the devastating earthquake and tsunami and the subsequent nuclear disaster in the spring of 2011, Japan decided to curtail its nuclear power industry and committed to diversifying its power supply through renewable energy technologies.

Most recently, Japan invested heavily in deep water offshore wind floating technology demonstration projects. The country has seized the opportunity to move away from reliance on nuclear power and focus on building a nascent, but economically powerful industry. Whereas Europe has had the upper hand and decades of experience innovating and constructing “fixed” offshore wind turbines, floating turbine technology is still a competitive field where no single technology-type or manufacturer dominates or has a significant lead.

And the market potential is huge—deep offshore designs can unlock potential markets off the U.S. Pacific coast, Japan, the North Sea, and the Mediterranean Sea, and presents a global export opportunity. In fact, a 2011 U.S. Department of Energy report estimates that more than 2000 GW of offshore wind capacity are in deep water.

To accelerate the growth of renewable energy development, Japan introduced a feed-in-tariff (FIT) in July of 2012, requiring utilities to purchase electricity from renewable sources at fixed prices. The generous FIT (23.1 Yen/kWh) has incentivized both land-based and offshore wind development and has also led to a growth in the domestic production of turbines.

Domestic production is expected to expand in anticipation of the government’s announcement that it will issue a separate FIT rate for offshore wind in the spring of 2014.  And while there are no official targets for offshore wind deployment, offshore wind is on the political agenda and the budget set aside for the project is 18.8 billion Yen.  It is estimated that 5-6 GW could be installed by 2030.

The anticipated FIT and Japan’s focus on domestic renewable energy deployment are driving innovation in offshore wind technology, primarily in deep water technology, which is where 80% of its offshore wind resource lies.  With the government’s support, several Japanese developers are constructing and deploying deep water offshore pilot projects.  Several scale models and full-scale spar turbines have already been deployed.

And in an interesting political twist of fate, a new public-private Fukushima Consortium—Marubeni, Mitsui, Mitsubishi, Japan Marine United, Statoil, University of Tokyo, and Hitachi, among others—has plans to deploy three different prototype floating turbines off the Fukushima coast, right off the site of the nuclear failure. This project is largely government-funded to the tune of US$242 million.

The first of the floating turbines to be deployed is a 2MW Hitachi turbine on a semi-submersible structure; two 7MW floating turbines shall follow. The goal is to ultimately reach full commercialization by 2018 with 1GW of offshore wind capacity.

But it is not only project developers and component manufacturers who see the economic potential of offshore wind development.  Investors such as the Goldman Sachs Group Inc. recognize the promise of offshore wind and have established Japan Renewable Energy, which plans to invest as much as 50 billion Yen into clean energy projects in Japan over the next five years.  Norwegian energy company Statoil, which is eager to build floating offshore pilot projects in international markets, has signed an agreement with Hitachi to use Statoil’s Hywind technology off the coast of Japan.

On the surface, Japan’s offshore wind installation capacity and current project development look very similar to the offshore wind deployment in State of Maine. Despite each having a strong manufacturing base and university R&D centers, both lag far behind the offshore wind industry in Europe and have much to gain from Europe’s decades of experience not only building offshore wind farms, but also in developing innovative technologies.  Still, both are trying hard to catch the wind and recently set goals of achieving 5GW of offshore wind energy by 2030. It makes sense for these two political entities to focus on deep-water offshore wind—the resource is greatest at these depths and both have workforces accustomed to employment at sea.

But that’s where the similarities end.  Maine may have laudable goals, but they lack teeth.  Japan on the other hand, has established a very strong FIT, and its offshore wind industry is expected to get even stronger in April 2014. The FIT legislation requires utilities to purchase the power produced by offshore wind farms.  Contrast this to the situation in Maine, where local politics have led to the withdrawal of a major European power player, Statoil, which was to bring its floating turbine technology to a 12MW project off the coast of Boothbay Harbor.

And while Japan and the U.S. talk about jobs, jobs, jobs, Japan is investing in and developing technologies at a much more rapid pace.  Once its domestic power generation base is achieved, the Japanese government expects to export the floating turbine technology to markets across the globe. Some have ventured that the domestic production of turbine and turbine components can have an economic effect that rivals Japan’s auto industry.

Understandably, governments and politics vary across political borders. But the take home message is clear:  public support in the form of clear and long-term policies is needed to draw developers, alleviate risk, and attract private investment.

The development of floating offshore wind in Japan could signal a familiar pattern: The U.S. loses out once again to the next generation clean energy technology, while it dawdles away on policy confusion. And it could be this technology—floating turbines—where there is a real opportunity to develop industry authority against European manufacturers who dominate the pile and gravity foundation market.

Other countries are taking offshore wind development far more seriously than the U.S. It’s not too late, but the U.S. needs to up its game to see offshore wind as a scalable, commercial sector.

The field is still wide open for the first mover in deep water technology. The U.S. has a scalable manufacturing sector, an experienced oil and gas sector (from where floating technology originates), significant federal R&D investment, and a large domestic market. U.S. DOE’s investment in R&D is significant and critical for domestic innovation, but investment is also needed in launching commercial-scale projects.

Japan is showing that a country can do both. The U.S. should follow its lead and become a real competitor on the world stage for offshore wind.

Energy Innovation in the States: From Energy Storage to Offshore Wind
Scroll to top
Send this to a friend