For many years, we at Clean Energy Group have been advocating for the deployment of clean, distributed energy technologies that can support critical infrastructure, such as hospitals, public shelters, fueling and communications centers and the like, when the grid goes down due to a storm or other natural disaster.

In the wake of SuperStorm Sandy, Clean Energy Group started the Resilient Power Project to support state and municipal efforts to deploy clean-energy, resilient power installations, and a number of states began designing programs to allocate public funds to this purpose.

Connecticut was first out of the gate with its microgrids pilot program. Now the Massachusetts Department of Energy Resources (DOER) and the Patrick administration have awarded $7.4 million to six municipal-led resilient power projects that will support critical infrastructure and services during natural disasters and other emergencies. These projects, once constructed, will keep electricity flowing to public shelters, wastewater treatment plants, and other critical community facilities when the electric grid goes down.

The awards are the first in a two-part, $40 million state grant program focused on using clean and renewable energy solutions to achieve municipal resilience. The program is funded by Alternative Compliance Payment (ACP) funds, which are collected from electrical retail suppliers that are unable to meet their compliance obligations under the state’s Renewable and Alternative Portfolio Standard programs. In addition to the six project grants, DOER has awarded 27 technical assistance grants to communities seeking funding to design resilient power projects. The communities receiving technical assistance awards may apply for project implementation grants in a second solicitation, for which awards will be announced later this year.

The project implementation awards include one microgrid, three combined heat and power (CHP) projects, and two solar PV projects with battery storage. The critical facilities to be supported include schools and community centers that serve as public shelters, police and fire stations, wastewater treatment plants, a municipal fueling station, and a hospital. The projects are located in Berkeley/Taunton, Boston, Lawrence, Northampton, South Essex and Springfield. More details may be seen in the accompanying map and table. 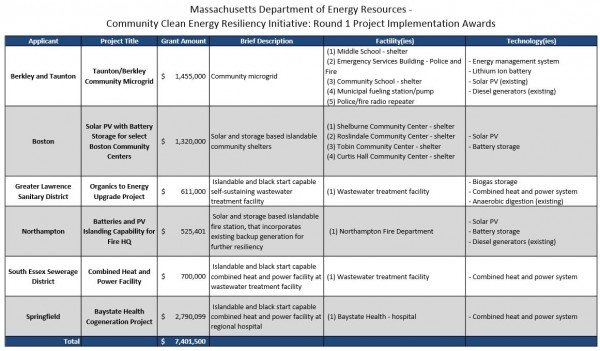 There are a number of significant innovations in the Massachusetts program that should provide a basis for similar programs in other states:

New York City: Power Stations in Flood Plain
Scroll to top
Send this to a friend