There are no upcoming events at this time.

Clean Energy Group’s Phase Out Peakers initiative is a collaborative effort to support local community and environmental justice groups across the country in their battles to phase out fossil fuel peaker power plants and replace them with clean renewables and battery storage technologies. It is the first national effort to systematically demonstrate with analysis and technology assessments how communities could use clean energy alternatives with battery storage to meet peak electricity demand and to capture local health and wealth benefits.

Clean Energy Group is collaborating with New York City Environmental Justice Alliance, UPROSE, THE POINT CDC, and New York Lawyers for the Public Interest (collectively known as the PEAK Coalition) to cast a light on the environmental and economic harms that peaker plants inflict on environmental justice communities in New York City and to accelerate the replacement of the city’s fleet of polluting peaker plants with renewables and battery storage technologies. The PEAK Coalition released a groundbreaking report that, for the first time in the country, details the true cost of these dirty power plants. Top findings from the report, Dirty Energy, Big Money, include: 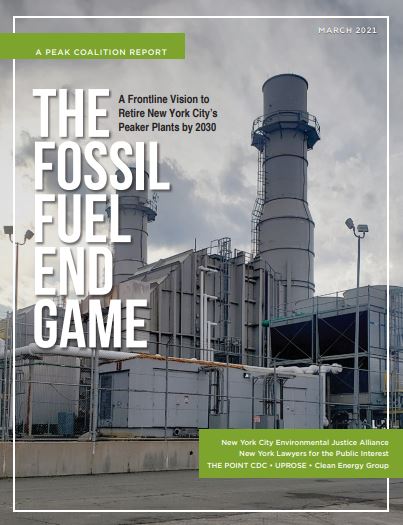 This was followed by a second report, The Fossil Fuel End Game: A Frontline Vision to Retire New York City’s Peaker Plants by 2030, detailing a strategic and policy road map to retire and replace all of New York City’s fossil-fuel peaker plants. It lays out a community-led strategy to replace about half of the city’s existing peaker plants with a combination of offshore wind, distributed solar, energy efficiency, and battery storage by 2025. The remaining peaker plants could be reliably and cost-effectively replaced with the same mix of resources by 2030.

Key takeaways from the report include:

Phase Out Peakers Across the Country

Peakers are not just an issue for New York City; they are a nationwide problem. There are more than 1,000 fossil fuel peaker plants operating across the U.S. today.

Based on a preliminary scan of publicly available data, the ten metropolitan regions most burdened by aging peaker fleets are collectively home to more than 200 peaker plants, representing a combined 60-gigawatt source of urban emissions. On average, the power plants operate less than 4 percent of the time, less than 300 hours each year, but they are likely to account for a significant portion of systemwide energy costs and local air pollution. Reducing the air pollution burden on environmental justice communities has always been an urgent problem, but it is now a greater public health crisis with the COVID-19 pandemic. Recent epidemiological studies have shown that increased emissions of particulate matter (PM2.5) and nitrogen dioxide (NO2) from power plants such as peakers have contributed to increased deaths from the virus in major urban areas. Reducing peaker emissions in U.S. cities could be a critical strategy to alleviate the adverse health impacts of air pollution on those suffering from respiratory conditions and cardiovascular disease. Video: What is a Peaker Power Plant?

This clean energy transition is not just theoretical. It has been proven by rapidly advancing market forces, with utilities increasingly choosing to procure peaking capacity from batteries powered by renewable generation over traditional peakers based on both cost and operational ability. Moreover, replacement is not only an economic or emissions reduction opportunity. Retiring or reducing reliance on these plants could be a major win for environmental justice.

The more than 1,000 fossil fuel peaker plants in operation across the United States are predominantly located in disadvantaged communities, sited in or near mostly low-income communities and communities of color. (See our interactive peaker plant map to view more details about where these plants are located.) Peaker plants disproportionately emit health-damaging air pollutants – mainly ozone forming chemicals like nitrogen oxides (NOx) and harmful particulates – that contribute to poor local air quality and harm public health in these vulnerable frontline communities.

Replacing peaker plants in disadvantaged communities represents one of the most important environmental justice opportunities in the country. Not only can batteries and renewables deliver a cleaner source of peak energy generation, they can also be distributed throughout communities, providing opportunities for increased energy resilience, decreased energy burdens, and the potential for community ownership and wealth creation—benefiting communities instead of causing them harm. This peaker replacement initiative can serve as a model for how new energy technologies can be used now – not years from now – to help communities take charge of their energy future to end our reliance on outdated and dirty power plants and to stop the construction of new ones. May 27, 2021
How can we protect vulnerable people when the power goes out? Getting it right will be a key energy equity test for the Biden administration’s infrastructure plan.
END_OF_DOCUMENT_TOKEN_TO_BE_REPLACED
https://www.cleanegroup.org/wp-content/uploads/bigstock-Electrical-Power-Grid-In-Silho-8081918.jpg 330 480 Clean Energy Group https://www.cleanegroup.org/wp-content/uploads/Clean-Energy-Group-logo-275x70px.png Clean Energy Group2021-05-27 15:56:052021-08-20 11:02:38Outages and outrages: The fossil fuel industry exploits blackout fears