THE FUTURE OF SOLAR: IT’S STORAGE

“Virtually all quarters agree that the real future for solar — and much of the energy industry — depends on electricity storage, which banks solar power for when the sun isn’t shining.” Ivan Penn & Russ Mitchell, Los Angeles Times¹

As more solar PV is connected to the grid, eventually leading to oversupply and solar curtailment, its value to the grid decreases. By transforming solar into a flexible, responsive, dispatchable resource, energy storage can preserve the value of solar to the power system. It can insulate solar customers from adverse changes to solar policies and utility rate structures that could jeopardize the value of their clean energy investments.

Solar energy generation has grown exponentially over the past few years, a trend that shows no signs of slowing anytime soon. This is particularly true for states with strong renewables generation and emission reduction policies, like California, Arizona, Massachusetts, and Hawaii.

This is good news for climate and environmental protection, but along with success comes new challenges.

During that same period, wholesale electricity prices in California dropped below zero. Negative pricing sounds like a positive thing for consumers, but it points to two major obstacles facing solar growth in California and other states with relatively high renewables penetration: oversupply and value deflation.

Oversupply can happen when intermittent solar and wind produce enough electricity to push demand for traditional baseload generation below forecasts. For the electric grid to function properly, energy supply must be kept in constant balance with energy demand. Both an oversupply and undersupply of energy can result in serious problems, like widespread outages. When production by inflexible traditional generators, like coal and nuclear plants, can’t be pushed any lower, negative pricing and renewable generation curtailment occur.

Curtailment means that some portion of the solar energy generation gets cut off, essentially wasting free, clean energy. In 2017, the president of the California Independent System Operator, which manages the state’s electric grid, warned that the grid operator may be forced to curtail as much as 8 gigawatts of power at certain times during the spring season, mostly solar (4). That’s a lot of lost clean energy.

Oversupply and curtailment are big factors in the second major issue facing renewables growth, value deflation. The fact is, that as more and more solar comes online, producing energy at the same time, the value of that generation to utilities and the grid declines.

This is most evident when curtailment occurs. With high enough levels of curtailment, the value of solar could decline to the point where additional installations are no longer worth the investment.

This peak transition is illustrated by California’s infamous “duck curve.” It shows a steep decline in net energy demand as solar production ramps up in the morning, and an even steeper increase in energy demand in the early evening as solar production winds down and people return home from work (5). Similar trends have been seen in Arizona, Hawaii, and even the northeast, where solar expansion in Massachusetts is pushing down mid-day electricity demand throughout the region (6).

These large fluctuations in demand create balancing concerns for grid operators, which are often solved by inefficiently ramping expensive natural gas “peaker” generation up and down. But ironically and troubling, these trends are likely to intensify in states that have made the most progress on solar policy, leading them to reevaluate these policies.

States and utilities are responding to declines in the grid value of solar by adjusting net metering policies and imposing new rate tariff designs, leading to solar value deflation for homeowners and businesses as well.

California is responding by shifting most of its utility customers to time-of-use utility rates, where the highest prices for electricity occur when the sun isn’t shining. The state has also applied small charges to solar energy that is exported to the grid and allowed utilities to increase the demand charges applied to commercial customers. As noted in Clean Energy Group’s May 2017 report, Solar Risk: How Energy Storage Can Preserve Solar Savings in California Affordable Housing, the combination of these measures could result in more than a 50 percent drop in solar savings for some California utility customers who have invested in solar (7). (See Figure 8.)

Hawaii, with the highest rooftop solar penetration in the country, has taken similar steps. In 2015, Hawaii became the first state to dismantle its solar net metering program. The following year, the Hawaii Public Utilities Commission approved a pilot time-of-use rate program where electricity prices can jump by a factor of more than four times higher as the sun begins to set (8). Today, with limited solar exports allowed, most Hawaiian customers must invest in energy storage if they want to install a solar system.

This might be the most important issue in solar policy in a decade —without storage, the future economic value of solar is at risk.

That solar should be paired with battery storage is now a virtual consensus policy.

The National Renewable Energy Laboratory (NREL) raised similar concerns on solar+storage when evaluating what it would take for California to achieve 50 percent solar penetration by 2030 (9). In order to keep solar curtailments at a reasonable level and keep the cost of solar electricity production competitive with traditional gas generators, the study found that California would need an additional 15 gigawatts of energy storage — that’s more than 11 times California’s groundbreaking storage procurement mandate of 1.3 gigawatts.

Another report from NREL found that solar and storage can complement and enhance each other’s value when considering the replacement of natural gas peaker plants, a topic covered more extensively elsewhere in this report (10). According to NREL’s study, higher penetrations of PV, similar to those seen in California today, produce a “peakier” net load shape on the system, which in turn creates more opportunities for shorter duration energy storage systems to meet those peaks in demand. As stated in the report, the “potential of energy storage continues to increase with increasing PV penetration.” This analysis shows yet another synergistic economic relationship between solar and storage technologies.

In addition to enhancing and preserving the value of solar at the grid level, battery storage can also protect the value of solar for consumers (11). Pairing solar with storage for behind-the-meter (BTM) systems serving homes and commercial customers can act as a hedge against changes in state net metering policies and evolving utility rate tariffs. 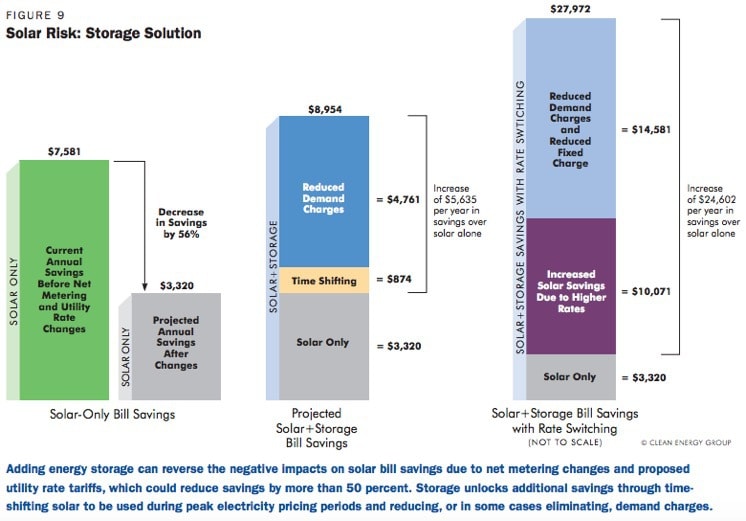 The bottom line for customer-sited solar+storage is this: the same analysis that estimated a 50 percent drop in solar value for customers under new California rules and rates also found that storage could completely reverse those losses, in some case delivering more than eight times the annual savings of solar alone. (See Figure 9.)

According to analysis by Navigant Research, global revenue from energy storage deployments supporting the integration of renewable generation will top $23 billion by 2026 (12). This impressive growth is expected for both utility and customer BTM installations, with BTM battery storage anticipated to account for about two-thirds of new storage capacity. Despite this positive outlook and continued battery storage cost declines, Navigant found that storage deployments are still hampered by a lack of consistent policies, market opportunities, and financing options across regions.

To ensure that storage becomes an integrated part of the solar equation before issues like oversupply and curtailment arise, all clean energy policies and market signals need to be established and aligned to recognize the added value that storage can bring to a solar project.

States need to consider policy options to incorporate storage value into future solar projects. Some states have already proposed or implemented measures that would reward solar projects that include energy storage. Hawaii’s Community-Based Renewable Energy program has been designed to incentivize renewable power that can be dispatched to correspond with peak grid demand. Under the program, projects will earn a premium for power exported to the grid between 5 p.m. and 9 a.m. (13).

Similarly, measures introduced in California, Massachusetts, and Arizona have proposed creating a clean peak standard that would require utilities to deploy a specified percentage of clean energy during periods of peak demand (14). Massachusetts is also approaching solar+storage in a different way, by including an energy storage adder for paired projects in its new Solar Massachusetts Renewable Target (SMART) program.

States should consider utility rate design to boost the uptake of solar paired with storage. As has been done California and Hawaii, implementation of time-of-use rates or critical peak pricing that more accurately reflect the varying wholesale cost of energy can give solar owners an economic incentive to store solar production during daytime hours and discharge it later when electricity prices may be higher.

States adopting these types of policy measures and market adjustments should pair them with extensive consumer outreach and education efforts. Individuals, businesses, and communities will need access to information about how changes to state solar policies and utility rates could impact their solar investments, and how storage can help mitigate against future uncertainties in the value of solar.

(5) California Independent System Operator, “What the Duck Curve Tells Us about Managing a Green Grid,” 2016, www.caiso.com/documents/flexibleresourceshelprenewables_fastfacts.pdf.

(6) Spector, Julian, “Massachusetts Is Staring Down a Duck Curve of Its Own. Storage Could Help,” Greentech Media, April 23, 2018, https://www.greentechmedia.com/articles/read/massachusetts-is-staring-down-a-duck-curve-of-its-own-storage-could-help#gs.3epLh_I 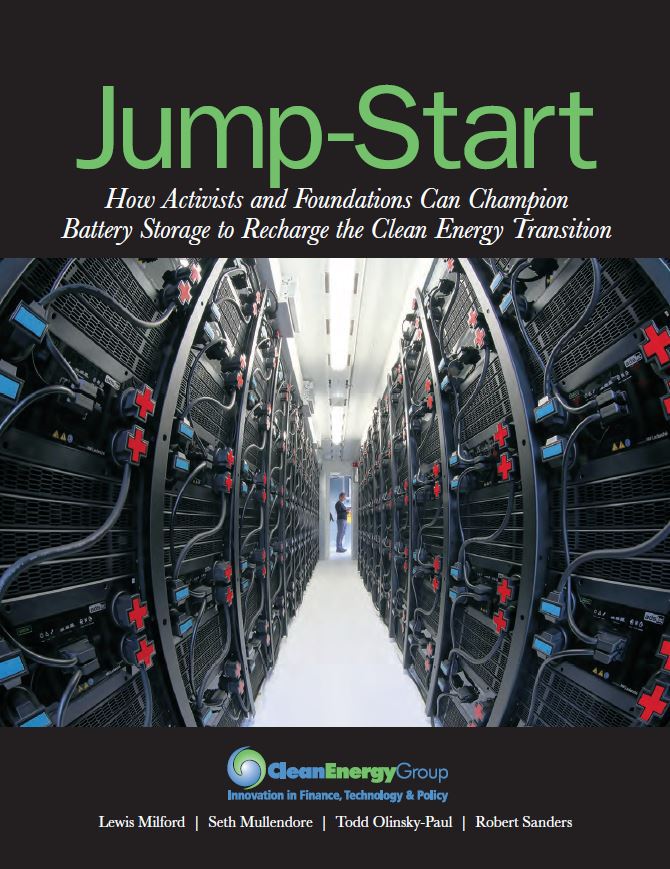