When Clean Energy Group first launched the Resilient Power Project, we focused much of our early efforts on working with Northeastern states that had felt the impacts of Superstorm Sandy in 2012. After multiple states in the Northeast implemented resilient power strategies, with incentive programs and demonstration projects aimed at advancing solar and battery storage installations for community resilient, we turned our attention westward.

We were hopeful that the Northeast trend toward resilient power programs could take root in California. At the time, top energy regulators essentially told us “thanks, but no thanks.” The message was that resilience is an Eastern problem and that power outage issues were not an issue in California.

Two years of devastating fires and this fall’s unprecedented utility preventative power shutoffs have dramatically changed the California narrative, and California regulators are telling an entirely different story. Now, battery storage has become a key resilience technology in the state, reflected in a major policy shift on the use of state incentives to support battery storage.

In a new proposed decision issued by the California Public Utility Commission (CPUC), regulators are proposing to devote the majority of new behind-the-meter energy storage incentives to advance energy resilience projects for vulnerable communities at risk of future forced power outages. If implemented as written, the proposed decision would allocate a total of $613 million in Self-Generation Incentive Program (SGIP) funds toward the state’s new Equity Resilience Budget, which will roll out in the first few months of 2020.

New funding for the resilience incentive represents more than 60 percent of additional SGIP funding authorized through 2024.

In particular, the Equity Resilience Budget provides a $1,000 per kilowatt-hour incentive for low-income, environmentally overburdened, and medically vulnerable households and critical service providers in high wildfire threat zones to install battery storage systems designed to power critical loads during an outage. Households and service providers that have already experienced utility wildfire shutoffs would also now be available for the incentive, which should cover most, if not all, of the cost of a resilient battery storage installation. Of course, incentives alone won’t guarantee that vulnerable populations will be adequately protected during outages. The incentives must be paired with outreach, education, oversite, and support from qualified technical assistance providers to help ensure that funds are appropriately and equitably distributed.

The CPUC proposal also calls for the establishment of a $150 per kilowatt-hour resiliency adder for SGIP projects supporting energy resiliency that are not eligible for Equity Resilience Budget incentives. When combined with non-resilience SGIP incentives, the resiliency adder should offset at least half the cost of batteries for these projects.

This is a welcome shift in policy from what we were hearing from California less than two years ago. Unfortunately, it often takes a crisis for policy makers to wake up to the real problems they didn’t know they were about to face. Better late than never, though many communities have had to suffer needlessly due to the delay.

Other states should similarly adopt this approach to battery storage and resiliency, before their next power crisis hits. With climate related outages on the rise, it’s only a matter of time until states see resilient power as their new way to keep the lights on. 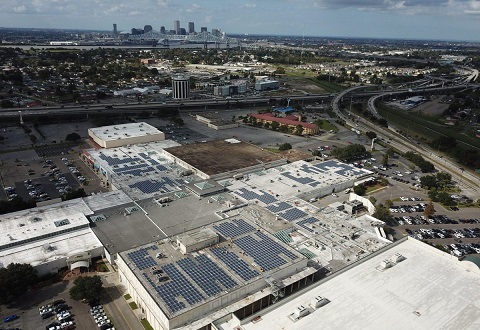 If you live in New Orleans, you know how often the electricity goes out. Advisers hired by the New Orleans City Council found that, between June 2016 and May 2017, there were a total of 2,599 outages and roughly half lasted two hours or more.

Sure, some of this can be blamed on heat, flooding and storms, but more than half the power outages reported were unrelated to weather. More than a third resulted from equipment failure.

Entergy, the local utility, has plans to invest heavily in new sources of power, including a controversial natural gas-fired plant in New Orleans East.  New Orleans should instead commit to a more resilient and reliable grid that benefits every resident.

Renewable distributed energy technologies can mitigate the impact of outages and help build a more resilient New Orleans. Battery storage, which can bank electricity during normal grid operations to be used in the event of an outage, can provide automatic and reliable backup power to residences and critical facilities when the power goes out. When battery storage is paired with solar photovoltaics (solar+storage), the system can potentially power loads indefinitely. All that’s needed for an effective solar-powered backup system is enough sun during the day — and we’re blessed with plenty of that.

Solar+storage in nursing homes, individual residences, and assisted-living communities could provide emergency backup power to electricity-dependent medical devices through an outage, or until residents can be safely evacuated. Over 2,100 Medicare beneficiaries in New Orleans rely on medical equipment that requires electricity. Add in Medicaid recipients and equipment-dependent people with private insurance and the number is likely much higher — not to mention the substantial percentage of the overall population for whom sweltering heat in the absence of working air conditioners amounts to a health crisis. For this medically vulnerable population, a short-term outage can be dangerous, even lethal.

In addition to emergency power support, solar+storage can also provide tremendous economic and resilience benefits to the grid. In Arkansas, for example, solar+storage systems were installed at two wastewater treatment facilities. During an outage, solar+storage provides the facilities with clean and reliable backup power. During regular operations, solar+storage cuts costs during times of peak demand, when electricity use is most expensive. (Think summertime when everyone gets home from work and turns on the air conditioner.) Traditionally, utilities have relied on gas or oil-fired power plants during times of peak demand.

Distributed customer-sited renewables, like rooftop solar, can be a cleaner and cheaper alternative to gas plants, which operate intermittently and inefficiently at a higher cost per kilowatt hour than many other sources. In Vermont, Green Mountain Power (GMP), the state’s largest utility, is installing 100 battery-storage systems for customers who are dependent on electricity for medical needs as part of a larger 2,000-unit battery-storage pilot program. GMP operates the systems, storing energy throughout the day to deploy during times of peak demand. In 2019, GMP-regulated batteries offset $900,000 in demand charges in a single hour (a cost that would otherwise have been billed to customers). Some households are also reaping the benefits of resilient, in-home backup power. This past October, after severe weather resulted in widespread outages, batteries installed through the GMP residential pilot provided an average of 9 hours of backup power to 1,100 households.

Unfortunately, battery storage remains virtually unused in New Orleans. Even with new requirements for nursing homes to invest in backup power systems, battery storage was overlooked in favor of gas or diesel generators. Fossil-fuel powered generators emit toxic fumes and can require frequent refueling, an expensive and challenging requirement during a disaster. Moreover, generators can be difficult to operate, especially for frail or mobility-impaired people. Solar+storage burns no fuel and produces no emissions, toxic or otherwise. There is also no “ramp-up” time for battery-stored electricity to kick in after the utility outage begins. The stored energy can be available on-demand.

Upfront costs of solar+storage are typically higher than gas generators, but over time the savings can add up, as was demonstrated in a study conducted in Puerto Rico after Hurricane Maria.

In New Orleans, solar+storage systems remain out of reach for too many utility customers. A report published by Clean Energy Group in partnership with local and regional nonprofit organizations, ranked New Orleans last among five cities when it comes to installing solar+storage in four types of critical facilities, including fire stations and nursing homes. The problems: high upfront costs, a lack of state or utility incentives, and low potential for electric bill savings due to the structure of utility electric rate tariffs for commercial customers.

The report had a silver lining, however. When the value of avoided outage-related costs was factored in, solar+storage was found to be a positive investment for all four critical facilities. Avoiding outages spares businesses and services sometimes severe costs. They range from loss of cell and internet services to loss of life, due to lack of medical care or disaster-response services.

As part of a goal to achieve 100 percent renewable energy in New Orleans by 2040, EFNO proposes getting there in stages, or “tiers.” Tier 1 requires that by 2025, 10 percent of the city’s energy come from resources that build community and grid resilience, including distributed solar+storage and utility-scale battery storage. Tier 2 focuses on customer programs, such as community solar and energy efficiency, measures that help low-to-moderate income households access affordable clean-energy resources.

Combined, Tiers 1 and 2 could provide 30 percent of New Orleans energy by 2025. The remainder, outlined in Tier 3, would come from the embrace of large scale and cost-competitive renewables, like wind and solar farms. The City Council is expected to vote on the RPS in the upcoming months.

Battery storage, implemented strategically, could be a valuable contribution to the nation’s shift toward renewables. As a community, we need to make sure the shift is socially just and technically cutting-edge. The technology to ensure that another life isn’t lost due to a power outage exists. The same technology can build a more resilient and reliable grid for New Orleans.

For the sake of all of us who live here, it’s time for the City Council to commit to resilient power investments in New Orleans’ energy infrastructure.

This blog post was originally published in The Lens.