“This project provides resilient power during emergencies while benefiting the grid at other times. The technical innovations will reduce cost and make the project commercially viable. This is the perfect project! It has social value, technical innovation, and furthers renewable integration for the grid.”

The Stafford Hill Solar Farm in Rutland, Vermont is part of an effort to improve the resiliency of Vermont communities that were hit hard by Hurricane Irene in 2011. It includes solar panels and battery storage, and is configured as a microgrid. A central component of the microgrid’s design is to supply backup power to a public emergency shelter at the Rutland City High School. To do this, the microgrid is capable of disconnecting from the larger electricity grid during power outages.  It will supply power from the solar panels and battery to the emergency shelter until grid power is restored.

For Green Mountain Power, the state’s largest utility and owner of this project, this microgrid represents an opportunity to showcase new technology – the utility frequently uses Rutland as a testing ground before spreading innovative energy solutions statewide – as well as to integrate more renewable generation.  The microgrid also provides important grid services, including frequency regulation, and will pay for itself by enabling the utility to significantly reduce its capacity payments to the New England grid’s Independent System Operator.

In its first year of operation, the project shaved enough peak demand to save its customers approximately $200,000 during a single hour (see a press release here). On August 12, 2016, when summer temperatures were in the nineties, GMP was able to reduce its contribution to the New England grid’s peak hour of demand, when the cost of power is most expensive. Instead of meeting customer needs with electricity managed by the grid operator, ISO-NE, GMP was able to use local electricity generated by the solar farm and stored in the batteries. The money saved will go directly to lowering costs for customers.

The project is part of Rutland’s on-going revitalization, where a focus on renewable energy – and solar in particular – has earned the city a new title – “Solar Capital of New England.” This solar+storage microgrid is installed at a brownfield site that was formerly the Rutland City landfill, and it is the first known solar+storage project to make use of this type of site. Green Mountain Power, the largest utility in Vermont and the owner of the microgrid, intends to make Rutland the Energy City of the Future, through this and other innovative projects cooked up at its Energy Innovation Center, also located in Rutland.

The innovative Stafford Hill microgrid was supported by a joint federal/state energy storage deployment grant awarded in a solicitation issued by Vermont Department of Public Service. The grant was the result of a collaborative effort between VT Department of Public Safety, U.S. Department of Energy Office of Electricity (DOE-OE), Sandia National Laboratories, and Clean Energy States Alliance. Dr. Imre Gyuk, manager of DOE-OE’s energy storage program, was particularly pleased with this project, noting, “This project provides resilient power during emergencies while benefitting the grid at other times. The technical innovations will reduce cost and make the project commercially viable…. This is the perfect project! It has social value, technical innovation, and furthers renewable integration for the grid.”

The Stafford Hill solar farm includes 7,700 solar panels capable of producing 2.5 megawatts (MW) of electricity, which is enough to power 2,000 homes, plus 4MW of battery storage. According to the US Department of Energy, the Stafford Hill Solar Farm is the first project to establish a microgrid powered solely by solar and battery backup, with no other fuel source.

Webinar Recording: A Solar Storage Microgrid for the Energy City of the Future (8/22/14) 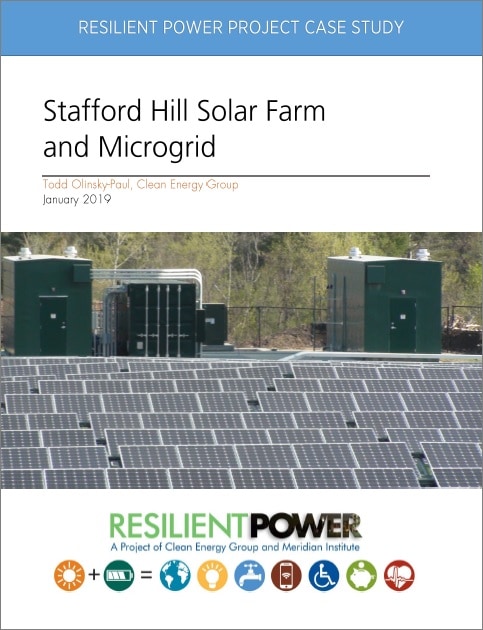