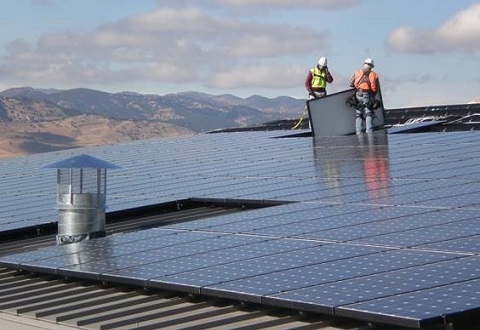 In wake of a natural disaster, widespread power outages leave communities cutoff from everyday necessities, such as water, refrigeration, and communication. The most vulnerable communities are disproportionately impacted and oftentimes unable to access critical services during an emergency. Most recently, Hurricane Florence highlighted the obstacles to preparing for and delivering services during a disaster. Despite evacuation orders, many elderly and disabled residents were unable to leave due to a lack of transportation, physical ability, or the funds to go elsewhere. These residents were forced to shelter in place, despite increased risk of life threatening conditions. Even after the storm had passed, over 400,000 homes remained in the dark and many businesses remained closed, leaving residents dependent on governmental and nonprofit support.

For the City of Boulder, a September 2013 flood emphasized the need for energy resilience as critical to providing emergency services. Over an eight-day period 16 inches of rain fell, resulting in an unprecedented 100-year flooding event. Critical infrastructure was damaged, forcing two water treatment facilities to close. Thousands of households experienced power outages. Residents turned to community institutions for help, but the widespread outages meant that critical services were either offline entirely or severely debilitated.

As part of the Department of Energy’s Resilient Energy Delivery Infrastructure (REDI) initiative, which funded development of smart grid technologies in local governments that have experienced a recent major disaster, the City of Boulder partnered with two leading nonprofit services providers to demonstrate how solar PV and battery storage (solar+storage) systems can reliably support critical loads during an outage. In addition to REDI funds, the City of Boulder was also supported by the Clean Energy Group’s Resilient Power Project and received grant support for preliminary solar+storage planning through the Technical Assistance Fund. The Resilient Power Project works to increase access to solar and battery storage technologies among disadvantaged communities. Partnering with Via Mobility Services (Via) and Boulder Housing Partners (BHP), the City of Boulder invested in two resilient infrastructure projects that provide backup power to community services in the event of an emergency. BHP is the housing authority for the City of Boulder and is responsible for a third of all affordable housing in Boulder. Via is a nonprofit mobility services provider that operates a variety of transportation programs for seniors, people with disabilities, and others living with mobility limitations in Colorado. Although both projects included solar+storage and resilience upgrades to pre-existing facilities, the projects differed in scope and purpose.

In addition to being a leading affordable housing developer, BHP also acts as an emergency command post for more than 3,000 low income residents, many of whom have increased vulnerability to power outages. Working with the City of Boulder, Independent Power Systems (IPS), and GRID Alternatives, BHP installed solar+storage, two electric vehicle (EV) chargers, a small gas generator, and a smart control system at their North Boulder headquarters. The resilience upgrades are anticipated to save BHP over $7,000 annually in avoided outages ($6,295) and electric savings ($1,145). The solar+storage system consists of a 20.67-kW rooftop solar PV array and 24 6V SunXtender lead acid batteries. In the event of a power outage, an automatic transfer switch will allow the system to operate independent of the grid and continue to power facility critical loads, including: servers, outlets, heating, phones, wi‐fi, and EV charging stations. The system will come online in less than one second to ensure an almost seamless continuation of customer and business services. This was the case during an unexpected June 2018 outage. When grid power failed, the solar+storage system came on immediately and BHP staff was able to continue business operations as normal.

Via provides mobility services for disabled and elderly populations in Boulder and acts as a second responder during emergencies. The City of Boulder worked with Via, Independent Power Systems (IPS), and Pos-En, to develop and install a system that could provide backup power for transportation, facility operations, and IT critical loads. The upgrades included solar+storage, a natural gas generator, electric bus chargers, and a smart control system, and are estimated to save Via $8,000 – $11,500 in annual avoided outage savings and $582 in utility savings. The upgrades will ensure services remain online and available to the community during outages.

The solar+storage system consisted of a 10.7 kW PV solar array connected directly to a Toshiba 57.2 kW battery and was designed specifically to power critical IT loads, which is primarily computer and phone systems, during normal business operations as well as an outage. For non-critical facility loads, such as lighting, HVAC, and electric bus charging, an automatic switch will transfer the power from the grid to a natural gas generator in five seconds. Since the upgrades, Via has operated off-grid in one instance, on June 4th, 2018. The automatic transfer switch removed the facility from the grid and operated solely on power provided by the backup generator and solar+storage system.

Via included in the system design opportunities for future resilient energy build outs. When Via’s first all-electric bus arrives in late 2018, the generator will retain enough power to charge electric buses during an outage. In the event natural gas is not readily available, Via expressed interest in expanding solar+storage infrastructure to provide additional backup energy resources during an emergency.

The resilience upgrades projects at Via and BHP will effectively power critical emergency services for vulnerable communities in the event of an outage and offset approximately 60,000 pounds of CO2 emissions. By investing in local resilient energy infrastructure, the City of Boulder utilized clean energy technologies to mitigate the effects of outages on vulnerable populations during an emergency.

Clean Energy Group will host a free webinar on October 11th to discuss the projects with City of Boulder, BHP, Via, and the solar+storage companies that developed the systems. More information about the webinar can be found at https://www.cleanegroup.org/webinar/supporting-housing-and-mobility-with-resilient-power-in-boulder/. You can also learn more about projects on Clean Energy Group’s featured resilient power installation pages for the Boulder Housing Partners and Via Mobility Services projects.