Last September, the Hawaii Public Utilities Commission approved a pilot program in which residential utility customers pay a drastically different price for electricity depending on when they’re using it. This type of rate design, known as time-of-use (TOU) pricing, is nothing new.

But what is new is that the rate structure could have profound implications for the value of solar systems on the islands, and energy storage might be needed to keep those systems economic. In that story is a lesson for the country and the future of solar.

Many utilities have TOU programs that charge higher rates for electricity used during peak periods and lower rates during off-peak periods. The twist is that under Hawaii’s TOU pilot program the lowest electricity prices occur during the middle of the day – when solar production is at its peak – and ramp up in the evening. Low daytime rates and high evening electricity prices will translate into significantly lower energy savings for solar customers that don’t have a way to store energy generated during the day.

Anyone wanting a glimpse of the future path of solar, and how it could affect utility rate design, in the U.S. can just take look at what’s going on in Hawaii. As an island state, Hawaii faces some electricity constraints that other states may not have to contend with, but it still serves as a good indicator for where other leading solar states may be headed soon.

With nearly one out of every five costumers sporting a rooftop solar system (very few of which currently have storage), Hawaiian Electric Companies has to deal with a lot of solar pouring onto the grid during the middle of the day. In 2015, Hawaii became the first state to dismantle its solar net energy metering program. Instead, the state replaced net metering with two options for solar customers: a grid-supply option, which pays utility customers about half the retail rate for exported energy, and a self-supply option, which includes storage and only allows very limited, uncompensated export of solar energy.

Now, with the introduction of TOU rates and peak evening pricing, Hawaii is taking the next step in its renewable energy evolution. By charging less for electricity during peak solar hours and more during the evening when net demand is on the rise, the utility is aiming to encourage customers to use more electricity during the day when low-cost solar energy is plentiful.

Under this TOU pilot program, electricity prices can jump more than four times higher as the sun begins to set in Hawaii. The price increases from a daytime low of 10 cents per kilowatt-hour to 47 cents per kilowatt-hour at 5pm for residents of the Big Island. Without energy storage, nearly all of the solar generated by residential solar systems throughout the day goes towards offsetting the lowest priced electricity during the daytime hours, severely impacting the economic benefits of solar for Hawaiian customers. With less value for energy produced during the day, solar customers without storage are unlikely to opt into this new rate. However, both the Big Island and Maui have already reached the mandated cap on accepting grid-supply customers. This means that any new solar customers are likely going to be looking at both solar and storage under the self-supply option.

The realty is simple: storage changes the value proposition for these solar customers. Instead of solar energy merely offsetting 10 cents per kilowatt-hour during the day, it can be stored until the evening when it’s worth much more to both the customer and the utility. Energy storage allows solar customers to maximize the value of their system and fully capture the benefits of solar.

With storage costs on a rapid decline, combining solar with storage will increasingly make sense for Hawaii’s utility customers. Even households without solar may begin to look into investing in storage as a way to lower energy expenses.

Hawaii is well ahead of other states in rooftop solar penetration, but it’s not the only state with residential TOU rates. California is already well on its way to implementing TOU rates for all of its solar customers. Under the state’s updated net metering regulations (NEM 2.0), solar customers will be transitioned to TOU rates as the state’s investor-owned utilities hit their initial net metering caps. San Diego Gas & Electric already hit its 5 percent peak load cap back in July of last year. In Colorado, Xcel Energy is also introducing TOU rates for residential customers under a compromise deal with solar and consumer interest groups.

In support of a nonprofit coalition proposal for implementation of California’s Multifamily Affordable Housing Solar Roofs Program, Clean Energy Group worked with the energy software company Geli to assess the value of solar and storage under TOU rates. The analysis (shown below for an affordable housing building with 80 units) found that adding storage to a solar system in California could boost savings by ten percent for affordable housing residents based on existing TOU rate structures. The total savings translated into about a 3-year payback for Southern California Edison customers installing a solar+storage system.

The difference is that California still has comparably low levels of solar penetration, so the high-priced peak period occurs during the day when solar is still producing. As California reaches higher levels of solar deployment, the timing of peak electricity pricing will inevitably shift to high demand periods that occur later in the day.

The implications of this shift is particularly important for low-income households, who devote a disproportionately high percentage of their income towards energy expenses. It is a sad irony that the value proposition for residential solar is beginning to erode just as the country is finally getting serious about bringing solar benefits to low- and moderate-income families. That is why it is critical that storage be considered in any new solar initiative like the Multifamily Affordable Housing Solar Roofs Program. Without storage, low-income solar customers will be left vulnerable to looming changes in net metering policies and utility rates design.

Hawaii’s pilot program is currently limited to 5,000 customers. Whether or not this type of solar off-peak rate design will catch-on in Hawaii or spread to other states still remains to be seen. But with U.S. solar installations at one-million systems and climbing, it’s likely to be just a matter of time before some of Hawaii’s solar challenges reach the mainland and more utilities begin looking into similar electricity pricing structures.

As utilities increasingly show interest in alternative rate structures like TOU pricing, particularly for solar customers, it won’t be long before the U.S. realizes SolarCity CEO Lyndon Rive’s prediction of “hundreds of thousands, if not millions, of solar systems combined with storage.” 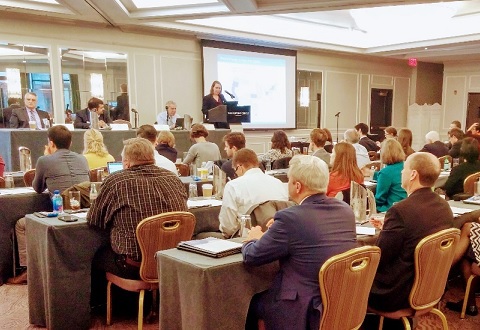 Over the past decade, state Renewable Portfolio Standards (RPSs) have been one of the most effective ways to advance solar and other clean energy technologies at the state level. Twenty-nine states plus the District of Columbia have RPS policies, which require utilities and other electricity suppliers to procure a specified portion of their electricity supply from renewable energy. The Clean Energy States Alliance (CESA) has worked with many of the RPS program managers as part of the RPS Collaborative.

This kind of information sharing is the goal of the annual RPS Summit, which took place from November 30th to December 1st, 2016. RPS administrators from 22 states attended this year’s Summit, as did renewable energy certificate (REC) tracking system administrators, RPS analysts, representatives from national energy labs, federal officials, and other stakeholders. In total, the Summit included over 100 people with a wide range of interests and perspectives on RPSs for an invigorating and educational two days of presentations, panels, group discussions and networking.

Representatives from many states presented updates on their RPS programs. In Massachusetts, for example, a solar carve out, which mandates a certain amount of solar generation be used for the RPS, has, in combination with other factors, increased solar deployment so successfully that the state met its first goal (450 MW by 2017) three years early, and its second goal (1600 MW by 2020) two years early. The challenge now is to maintain solar growth while making solar incentives more cost effective to implement and lowering ratepayer costs, along with various other program improvement objectives. At the Summit, Kaitlin Kelly of the Massachusetts Department of Energy Resources described the state’s proposed next generation solar incentive program.

Meanwhile in Washington, DC, an ambitious solar carve out has proved to be a both a challenge and a leadership opportunity. DC is small and densely populated, which means that there is limited space for large-scale solar arrays. DC does, however, have ample rooftop space. To support rooftop solar deployment, DC produced one of the most sophisticated solar maps in the country, allowing users to figure out if solar is right for their building and demonstrating that DC has many rooftops suitable for solar.

A critical challenge discussed in many break out groups and presentations was how to ensure that low-income households are able to access the benefits of solar power. One solution is community shared solar, which allows renters and others who do not have adequate roofs for solar panels to experience the rate savings from solar. As indicated in a presentation by the Smart Electric Power Alliance, 14 states plus DC have enacted policies to support community solar development. Many other low-income solar models are also being implemented across the country.

The 2016 RPS Summit included many other presentation and discussion topics related to solar. Links to most presentation slides are available on the CESA website at www.cesa.org.