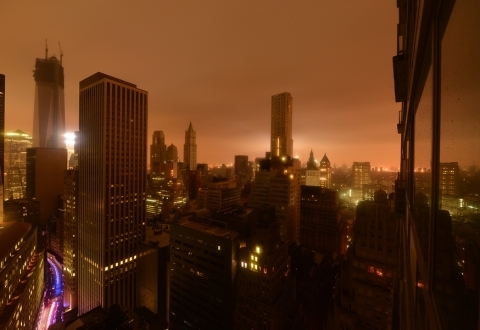 For years, people have put solar panels on their roofs — and states have helped fund them — to clean up the environment. Now, after Hurricane Sandy and the real threat of more severe storms, there’s another reason for solar: keeping the lights on.

A new “power resiliency” market is developing in the areas hit hardest by Hurricane Sandy. Some governors and policy officials are motivated by climate change, while others are driven by a clear-eyed sense that there will be more dangerous storms in the future, whatever the cause. In both cases, they see the need to act.

Several northeastern states, for the first time, are launching new programs and funding to put more clean and resilient power in homes, offices and buildings, to keep power on when the next storm hits. Companies are also targeting this market with clean energy systems that can continue to provide behind-the-meter power when the grid fails. These systems include solar photovoltaics matched with batteries (solar alone does not work during grid outages), combined heat-and-power systems, and fuel cells.

This is an entirely new business model for clean energy. It follows the principles of leading technology strategists such as Clayton Christensen of Harvard Business School. In his seminal book, The Innovator’s Dilemma, he wrote that for clean energy to be “disruptive,” it must offer customers new functions and values that the market does not now deliver. This drive to make local power more resilient than utility power has a good chance of making clean, resilient energy truly disruptive and competitive.

So far, most companies and public programs have promoted these smaller-scale, distributed generation (or DG) systems as environmental technologies that will reduce greenhouse gas and local emissions. Even though they would get cleaner air, many customers do not want to pay more to clean up the environment; it’s the public’s job, they say, not theirs. But now the clean energy world is changing to give those customers something else of immediate and direct value — protection from power outages.

As we all painfully know, one of the most damaging after-effects of extreme weather events like Sandy is the loss of electric power. More than 8 million people lost power during Hurricane Sandy, many for weeks, causing enormous economic harm and personal hardship, and threatening the resiliency of local communities. Basic well-being was threatened by the loss of life’s basic most needs — a warm and safely powered home and business.

These storms revealed what energy insiders have known for years: the current power system, based on centralized generation and relying on above-ground wires threatened by falling trees, is not reliable enough during extreme winds and storms. In the past, when a storm meant lost power, state policymakers usually called for more of the same — transmission upgrades or other incremental measures to preserve the utility status quo and keep the central power system intact. But that system fails to give customers reliable power when they need it the most.

Following Sandy, Northeast governors and policymakers now are moving in a new direction. They, along with some progressive utilities and new energy startups, know that the electricity system can be made more resilient in new ways. They have begun to create new business models for clean resilient power. Here is some of what states and companies are doing.

The State of New York has plans to invest more than $60 million for more resilient power systems in critical infrastructure, along with creative ways to provide bonus incentives for new systems sited at these important facilities of refuge.

Because of Sandy, the leading New Jersey utility plans to invest more than $450 million in new solar systems around the state, according to the utility president, “because something more needs to be done in terms of grid resiliency.” Clean Energy Group and Clean Energy States Alliance have released a new report on how RPS laws can be designed for more resilient power.

New Jersey also is looking at how to use bond proceeds to finance more resilient power systems at wastewater treatment plants, which often fail to run during outages.

The governor of the State of Connecticut wants to invest $45 million in micro-grids, to firm up local power systems during outages and create “islands of energy security.”

Companies like New Jersey-based Solar Grid Storage are promoting ways to incorporate battery technology and new financing models to get resilient solar systems into commercial buildings around the region.

Federal and state officials want to see how to get more resilient power to gas stations, which typically lose power and cause major disruption to motorists during storms.

The City of New York issued an “after action” report this month on Sandy impacts that called for more resilient power for street lights, to develop healthcare communications systems that don’t fail during storms, and to create better power plans for multi-family housing; as a sign of the importance or power supply issues, a third of the report deals with power outages.

Maryland is funding the first integrated system using solar energy and batteries to power buildings and electric vehicles as well as the power grid; and a solar-powered microgrid to supply power to a mixed-use development in the event of a grid outage.

Massachusetts has funded projects for experimental batteries for grid protection and is about to commence a study of district energy systems for outage protection.

New federal rules issued by the Federal Energy Regulatory Commission allow small-scale resilient energy systems with battery storage to get revenue when they operate to firm up the transmission grid, a model that could boost use of these systems.

The push for more resilient, cleaner power is now beginning in earnest, for the first time in our history. Public officials are not content to ignore the power losses and the failure of energy systems to withstand increasingly severe storm damage. They are not standing still or standing pat on old solutions that preserved the status quo. This is the beginning of a revolution in energy economics, giving customers new value from clean energy.

Let’s let Clay Christensen, the Harvard guru of technology innovation, explain why this power resiliency strategy is so important to create new uses for clean energy:

If… a company stretches or forces a disruptive technology to fit the needs of current, mainstream customers… it is almost sure to fail. Historically, the more successful approach has been to find a new market that values the current characteristics of the disruptive technology.

The new market for these technologies is the millions of people who are sick and tired of losing power during a storm, losing business during an outage, or maybe even risk losing their life without power.

You don’t have to be an environmentalist to buy or invest in clean energy. You should do that if you simply want to keep your lights on during the next storm.

https://www.cleanegroup.org/wp-content/uploads/blogphoto-Lower-Manhattan-Following-Power-Outage.jpg 330 480 Clean Energy Group https://www.cleanegroup.org/wp-content/uploads/Clean-Energy-Group-logo-275x70px.png Clean Energy Group2013-05-31 16:50:192019-09-13 14:01:38Resilient Power – A New Business Case for Clean Energy
Scroll to top
This site uses cookies to store information on your computer. By continuing to use this website, you shall be deemed to have consented to our use of cookies and to have accepted our website Privacy Policy.OKPrivacy Policy