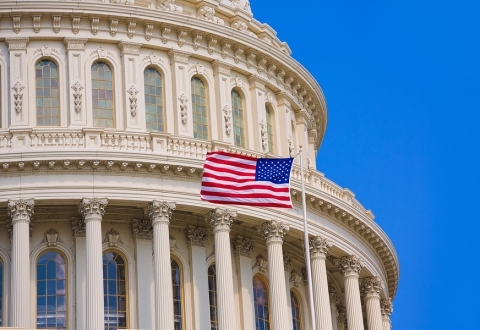 As the country looks for new sources of clean energy finance while Congress remains paralyzed, we might have missed the most obvious funders that have been right under our noses for years. They are the public infrastructure finance agencies all over America that know how to raise capital at the scale needed in this sector. In turn, Congress and the Administration should look to new policies to support this emerging, state-based infrastructure financing trend.

Hundreds of billions of dollars are needed scale up renewable energy, energy efficiency and clean energy manufacturing support. To fill this gap, some are looking to the states, regions and localities, a return to federalism as an investment strategy. Federal gridlock reminds us again that states have been the clean energy innovators. State funds have raised and leveraged over $12 billion in clean energy investment in the last decade. And clean energy policy at the state level has been done on a relatively bipartisan basis, unlike in Washington.

In this search for new forms of clean energy finance, a large group of state and local finance partners has been overlooked – the public authorities and other entities that do tax-exempt and taxable bond financing – a $3 trillion industry that has financed our nation’s infrastructure and public improvements, from bridges to hospitals to university expansion. In the U.S. over 50,000 state and local agencies help finance economic and community development.

To date, these agencies have not been that active in clean energy, with the exception of a few projects; but they now want to aggressively move into clean energy financing. As to the capital they can raise, municipal bond issuers in March 2012 alone brought 1,196 deals to market worth $34.50 billion. That makes $78.3 billion in 2,927 deals in only the first three months of 2012.

Let’s compare this scale to the possible declining federal support. Tax equity revenue generated for wind through the uncertain production tax credit was about $3.5 billion in 2011, while federal support for solar through various subsidies was about $2.5 billion.

These amounts are what municipal bond authorities finance every few days, every week of the year, all across the country.

Now, these bonding instruments are not exact replacements for tax equity investment, but they could usher in new forms of finance strategies. These tools have the potential to enlist major capital players such as institutional investors and pension funds that look for longer term, more predictable returns from infrastructure bonds—creating a new investment profile for clean energy with investors that finance at scale.

So far, there are some interesting emerging examples of bond financing in this space. In New Jersey, bond financing is being used to scale up solar installations though traditional public authority activity, now almost $200 million in investment. There are other models in energy efficiency finance and in other sectors that can be scaled up and replicated across the country.

Oddly enough, until now no one has ever approached these public infrastructure finance agencies to work on clean energy in any systematic way across clean energy markets. Some good news is that the membership organization of these authorities, the Council of Development Finance Agencies or CDFA, has entered into a partnership with Clean Energy Group and state clean energy funds to begin to explore use of bonding tools to finance clean energy.

So we have a unique financing situation for clean energy. To grow a robust clean energy economy, we have a new group of financial players who know how to raise hundreds of billions of dollars for infrastructure investment. They are motivated to make significant new investments in clean energy using existing bond instruments. They have begun to make small moves into the clean energy space, with a handful of investments. They are interested in becoming major players.

While the deadlock in Washington and the uncertainty over federal support is unwelcome, it need not mean a death knell for the clean energy industry. Instead, we have an opportunity to return to our federalist roots and look for our states, regions and local bonding agencies to begin to finance clean energy in the same way we scaled up the infrastructure that made America what it is today.

At the same time, there are many ways for the Administration to help, from clarifying various tax exempt rules to favor clean energy bonds to considering other support mechanisms that put the states in the financing lead. Congress too has a role to play to create a more bottom up, federalist financing strategy for clean energy.

At the very least, this new state-based policy conversation around infrastructure finance should begin now, to begin to shape a new clean energy investment strategy that does not rely so much on the whims of Washington.

This blog post originally appeared on the National Journal’s Energy Experts Blog, May 14, 2012.