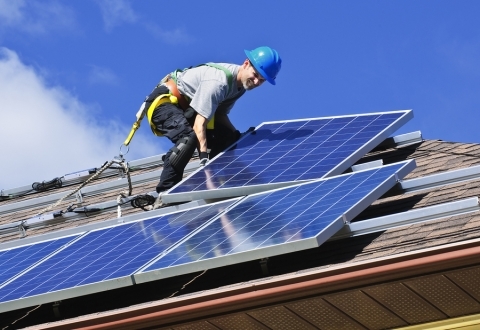 The President’s speech to Congress on September 8th did not say anything explicitly about clean energy. But the provisions mentioned that might promote clean energy jobs were the federal infrastructure bank idea and the project to fix up our nation’s schools with energy efficient equipment, along with some others.

These projects are good starts, but there may be some ways to accomplish the same results without Congressional approval. I suggest a few here: all propose “leading from behind” the states, which have proven the consistent leaders and job creators on clean energy for the last decade.

First, while the national infrastructure bank is a good idea, it may have rough sledding in Congress. The Administration might consider an alternative: fund existing or new state-level infrastructure banks that finance conventional projects like roads but also new clean energy technologies.

Second, many states have created new economic development programs and policies for clean energy – the Administration could direct funds (reprogrammed or repurposed rather than new funds) to these states to expand their job creating programs without creating a new federal bureaucracy.

For jobs creation, especially in clean energy where there is little federal bipartisan support, creating new federal agencies and programs may not be the answer.

In addition, relying on state experts who are closer to their markets and their companies might avoid some of the Solyndra controversies in the future. For decades, state officials have created policies and made or approved investments in energy technology and companies to build out the fossil fuel and nuclear energy infrastructure we now have. For a hundred years, through our heavily regulated, monopoly electric generation system, trillions of dollars of government directed support has gone to our network of energy technologies, utilities and companies.

Now that system is slowly moving toward clean energy. Unless electric generation becomes deregulated, a good experiment that largely stalled in the 1990s, state government will remain a big investor in that transition from a fossil fuel economy to cleaner energy technologies.

Future job creation in clean energy should respect, not ignore, these state level historical trends and institutional frameworks. The Administration might pay closer attention to this issue as well. For in conservative federalist fashion, additional Administration support for these states might avoid federal controversies and jump start the clean energy segments of the local economies with minimal delay. Recently, the US government lost a few hundred million dollars on a new investment in a failed technology. But no one seemed to notice.

No, it was not the infamous Department of Energy’s multi-hundred million dollar loan guarantee to Solyndra, the now bankrupt California solar manufacturer and the latest Rorschach test about government support for clean energy. Many politicians criticized the government’s investment in that venture, while clean energy advocates defended the investment as an experiment worth making.

Rather, the silent failure was a $320 million public investment in a new glider aircraft made by the Defense Department’s advance research agency: DARPA. That new plane, the Falcon Hypersonic Technology Vehicle 2, crashed over the Pacific in early August. Built by Lockheed Martin, it was designed to deliver non-nuclear military strikes anywhere in the globe in less than an hour. The latest crash was not its first; it was the second failed flight experiment.

But after the repeated loss of the plane and a third of a billion in public dollars, the head of DARPA, the project’s main public investor, Regina Dugan optimistically said, “We’ll learn. We’ll try again. That’s what it takes.”

This isn’t the first time that a DARPA-funded project failed. A profile of DARPA a few years ago explained,

As former DARPA Director Charles Herzfeld noted in 1975, “When we fail, we fail big.” Little has changed. According to (then) DARPA’s current chief Piller, some 85%–90% of its projects fail to meet their full objectives. Still, Piller points out, DARPA “has been behind some of the world’s most revolutionary inventions”… “the Internet, the global positioning system, stealth technology and the computer mouse.”

In contrast to the Solyndra backlash, after the news of this second DOD rocket failure and loss of hundreds of millions of dollars of public funds in that new technology, what did the critics say? Actually, nothing at all. Not one member of Congress openly criticized the latest DOD investment failure. Nobody said a word.

There was one reaction from a frequent writer about DARPA who praised its risk taking:

DARPA only undertakes projects that have a good chance of failing—projects that few others dare to take on. Projects like hypersonic flight. The failure is not surprising; permission to fail is what has enabled the agency’s spectacular success over its 53-year history.

So, the obvious question is: why the over-the-top criticism of this failed clean energy investment but an odd silence in the face of Defense Department projects which also fail quite spectacularly, expensively, and more frequently?

Apart from the usual political antics during the presidential election season, there might be a simple and troubling answer. The country has a fifty-year political consensus about technological risk taking to protect national security. Public defense investments are sacrosanct and encouraged. DOD clearly picks winners, and then sometimes fails, while trying not to pick losers. It is what government investment is about, and has guided billions of dollars of Defense spending over the years. (We have written previously about the myth that government should not “pick winners and losers.”) At DOD, experimental failure is considered necessary to ultimate success.

But the same anti-government-investment politicians who go ballistic about one clean energy mistake fall mysteriously mute when multi-hundred million dollar DOD technology bets go wrong. No one rails that DOD is “picking winners and losers.” There is no criticism at all. Except in cases of graft and incompetence, that is pretty much how the system of public investment should work at DOD.

For clean energy technology, there is not yet a political consensus like the one for defense technology that allows for trial and error. In clean energy, there is no Washington agreement for assuming any risks for increased investments to achieve future market share, to protect our national security, and or address foreign competition. Many politicians do not consider military and clean energy investment as similar “public goods”—where the private sector won’t take the risk in new technologies, and the government must invest to serve larger national goals that do not always deliver adequate private investment returns.

In defense, failed spending is part of learning for success; in clean energy, any failure is proof that the whole public enterprise is a bust. That political disparity makes no sense.

In these tough economic times, no one wants to see the government lose money on failed technologies or companies. But giving multiple and necessary defense failures a pass, while harshly criticizing one clean energy flop, is a dangerous double standard. It is the kind of political hypocrisy that the country cannot afford if it is to achieve national security and a strong clean energy future.

See also, Beyond Solyndra: Partnerships for Clean Energy, 9.19.11 by Mark Muro and co-authored by Lew Milford.