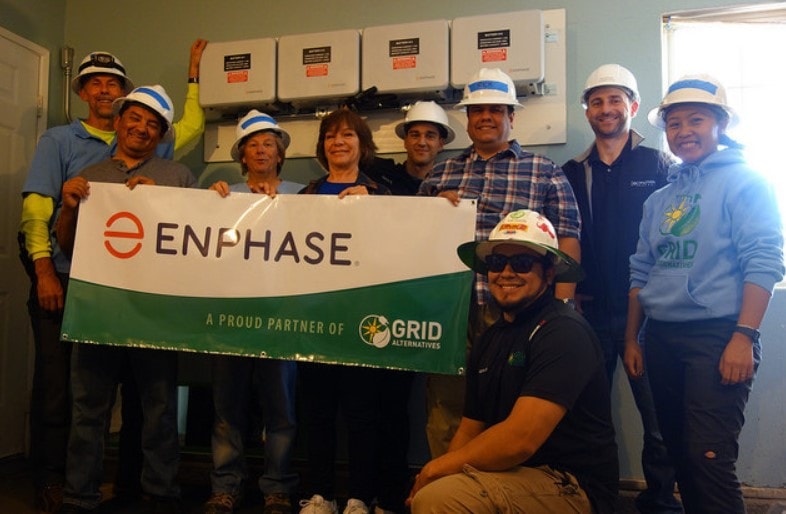 This energy storage pilot program is expected to double the savings that could have been achieved by solar alone, reducing each household’s electricity bill by nearly 50%.

The Imperial Valley, located in the southeast corner of California, has an arid desert climate. Residents in this area can face a heavy energy burden in the summer, with temperatures reaching up to 120 degrees. This presents a significant health risk to low-income seniors and others who are sensitive to the heat but may not be able to afford the high energy costs that come with frequent air conditioning.

Since 2013, Citizens Energy Corporation has operated a low-income rooftop solar program in Imperial Valley, providing rooftop solar systems at no cost to homeowners. The solar systems are purchased, installed and maintained by Citizens Energy, with all the savings going to directly reduce each household’s electricity bill. In addition, nonprofit GRID Alternatives has been providing no-cost solar to low-income residents through California’s Single-Family Affordable Solar Homes Program (SASH). In 2015, when additional state funding became available, the two organizations began working together, with Citizens providing GRID with leads for clients as well as some project funding.

In 2016, the Imperial Irrigation District (IID) became the first utility in California to meet the state’s 5% cap on net metering projects. This means the utility was no longer required to compensate solar customers at the retail electricity rate for solar energy exported to the grid. After hitting its cap, IID chose to drastically reduce the compensation paid to solar customers for their excess solar electricity, making rooftop solar much less financially viable for homeowners in the Imperial Valley, including those working with GRID and Citizens. Because if this, both organizations dramatically curtailed their operations.

In January 2017, GRID Alternatives partnered with Enphase Energy, with additional funding from Citizens Energy, to pilot an energy storage project for a homeowner in the region to find a way to recoup some of the lost savings. GRID paired 4kw of solar with four 1.2-kilowatt Enphase AC batteries and an AC combiner box to create an integrated system that can help the homeowner directly consume much more of the solar being produced on-site. The cost savings from this solar+storage system is expected to double the savings that could have been achieved by solar alone, reducing the household’s electricity bill by nearly 50%. In 2016, Grid Alternatives completed only 18 projects in the region; if able to secure additional funding or equipment donations for this model, it could serve as many as 50 projects by the end of 2017.

“GRID Alternatives’ mission of bringing clean and affordable energy to communities across the country aligns with Enphase’s efforts to promote solar energy, and together we are helping to provide much needed financial savings to our neighbors in need,” said Jeff Loebbaka, senior vice president of global sales, marketing and support for Enphase. “Our continued partnership with GRID allows families of all demographics to participate in a clean energy future.”

With many other municipal utilities across California set to reach their 5% net metering cap, this program could provide a model to continue solar expansion and ensure cost savings for low-income residents across the state.